It’s been a little bit since we got to play, but last night everyone mysteriously showed up ready to game - it just so happens that we’re trying to put together a short adventure for Gen Con, so I decided to playtest it.

The crew of the KN-12 FALSTAFF after making an ill-advised jump into hyperspace got into a fight with some nanozombies who had crept aboard their vessel. Flamethrowing ensued, which destroyed their cryopods, meaning that they’d need to make the remainder of their jump while conscious.

Hyperspace does things to your mind. It warps and bends it and makes you think things are real that aren’t, or makes things real that aren’t. This is why its generally recommended that humans spend all of their time in hyperspace in a cryopod, asleep. This didn’t happen, however, and most of them had to make Sanity saves. Everyone passed, except for Captain Samuels, who began to hallucinate a new crew member.

This worked out perfectly, because my old friend Khanh joined the group this week and after rolling up a character we just said, you’ve been with the crew of the KN-12 since before Banquo IV. You know Captain Samuels incredibly well. However, the rest of the crew doesn’t remember you, and your memories of Banquo IV are fuzzy.

This kind of put everyone on edge from the beginning.

After dropping out of hyperspace the crew took stock of where they were, in orbit around an uncharted planet surrounding by orbitting derelict vessels - a bad sign. This is the first time they’d been able to rest though, so they took the time to relax and try and heal some stress. Ramona and Sotetsu fucked giving them advantage on their recovery, and Dr. Goodhealth, a licensed psycho-droid, gave therapy to Louisa.

Edwards has been experimenting with a strange nanobot that he secreted off of Banquo IV. It’s named Seymour and it grows when he feeds it electronics. He’s also been conducting experiments on an infectious metal sperm that burrows into your brain through your ear canal. His goal is to rewrite the creature to be able to use it to command Seymour with his thoughts. We’ll see. 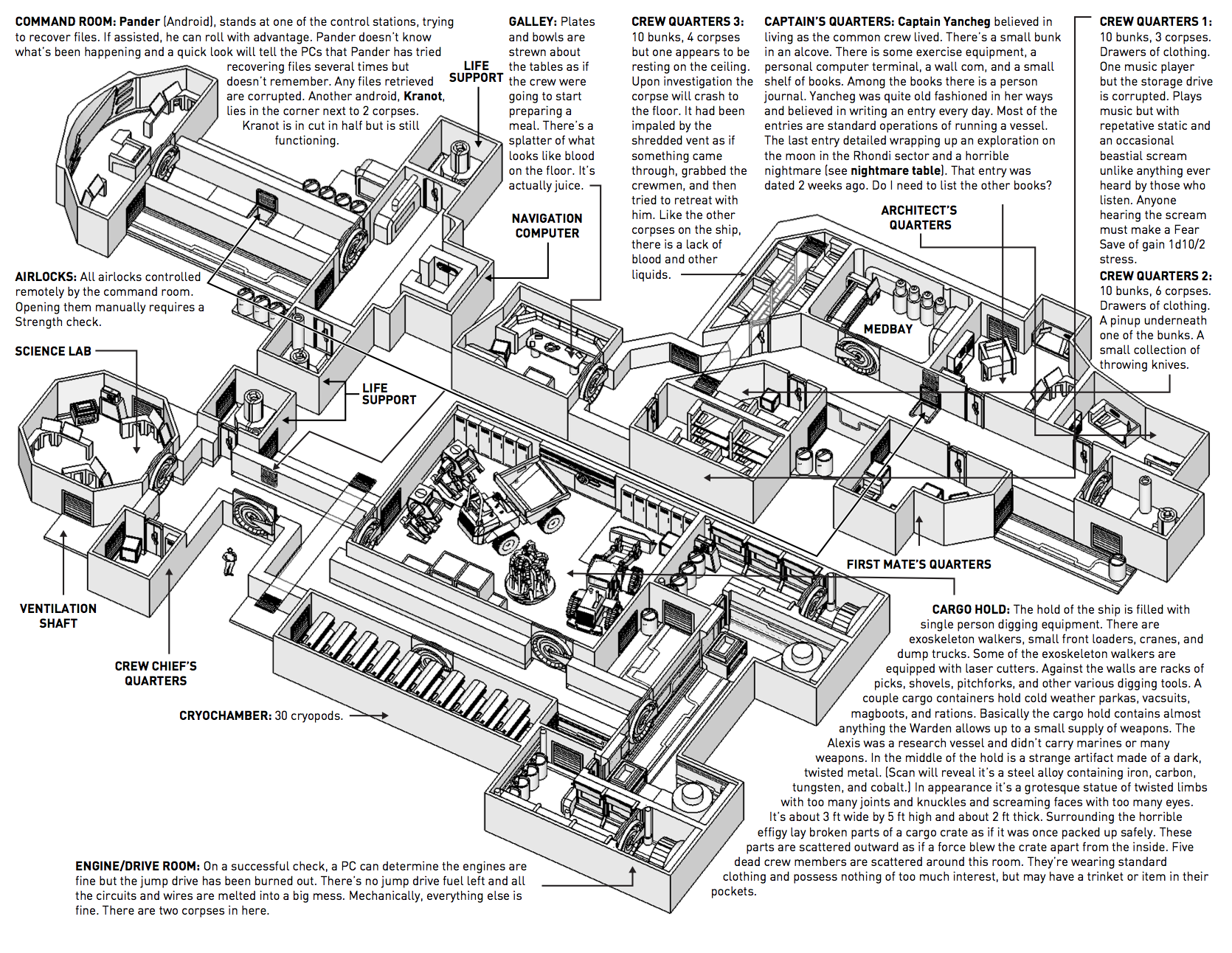 Rough draft of what we’re working on

After resting and checking in on their situation the crew tracked down a ship from the mass of ruined vessels that might be able to give them some spare parts for their jump drive. They found the Alexis, ran a scan, things seemed fine for the most part, but instead of docking, Ramona, Sotetsu and Dr. Goodhealth decided to do a spacewalk first and clear the ship. They do the spacewalk and enter through a manual airlock - it sticks a bit and Ramona can’t get it open even with help. It takes them a minute to bang on the thing to get it to open. No chance of a stealthy entry at this point.

When they boarded they found it running on auxiliary power with its emergency lights on. They made their way through the engineering deck, checking in on the cryochamber - 30 cryopods, all empty. Last recorded use was two and a half weeks ago. Was the ship abandoned? Is anyone still there?

They found the jump drive, a powerful Jump-3 engine, whoever built this ship had money and a lot of it. At the controls lay a desiccated near mummified corpse, drained of all hydration with no visible wounds. The drives are in poor repair and have no fuel. There’s a little remaining fuel for the thrusters, but it would take hours to refuel manually (by siphoning and filling up barrels, space walking them back), so they decide to dock.

While docking the boarding party checks out the cargo bay, and that’s where they find a disfigured 5’ tall totem covered in eyes and limbs and fingers and knuckles and just too many limbs. It seems to have broken out of whatever crate contained it. After making some Fear saves and gaining a little Stress, Ramona decides to cut off one of the fingers with her hand welder for study on the ship.

Holding the team at gunpoint, the extremely polite androids question them about their appearance and purpose on their vessel. The crew is shaken but kind of outnumbered, so they lower their weapons and start a dialog. The androids aren’t much help though, and are a little twitchy (Ramona hates androids). They don’t have any memories of the past couple of weeks and its clear they’re confused as to what’s happened to their crew.

The rest of the Falstaff crew decides to come aboard and finishes docking, while the boarding team follows the androids up to the bridge.

However, on their way to the bridge some kind of electro-magnetic pulse emanates from deep within the ship, followed by a piercing unearthly howl. Dr. Goodhealth and the other androids fall unconscious. Sotetsu crit fails his Fear save and so makes a Panic check, which he also fails, becoming cowardly - he’ll have to pass a fear save to even engage in combat for the next three hours. And he’s the only marine on board. Being a marine, his panic also triggers a fear save from those around him, luckily Ramona passes, picks up Dr. Goodhealth and leads them out towards the Falstaff.

They run quickly back to the airlock, which proves just as difficult to exit as it was to enter. That’s when they see the creature - like a giant squid with inky black tentacles splitting the body of a corpse in half, and using two large stalks as forelimbs, the things howls at them and charges.

Ramona barely gets the airlock open and slammed shut in time - but the ethereal part of the creature starts to phase through the door. Fuck. Help from her crew on the other side gets them back on the ship and they detach the vessel drifting away. A little less fuel and no closer to solving the mystery of where they are. We stopped there for the night.

Sotetsu survived his first session, so he leveled up. Everyone else will probably level up next adventure. Right now I like the leveling, it’s quick but scales, since it’s based on surviving. This means that if you die, you can catch up reasonably quickly to level 2-3. After that it gets harder. But then again, more people are dying, so this kinda keeps the party all around the same level.

Working on some new ways to present tables in the module

We’ve been working hard on this module and what you’re seeing is just a little preview, there’s still a lot that needs to be done before we hit the printer in a couple weeks. We’re working hard on info design - making things useable at the table - as well as trying to make a good intro adventure for horror hungry wardens. We’ve had about 300 downloads since the pdf released on drivethrurpg, so if you’re playing it, let me know what your experience is.