We had a two player game tonight for our sixth session of Gradient Descent. A lot of our players had to bow out from travel, work, and illness.

But I love small games! In smaller games players really can argue over choices and make their case. In bigger groups you have a lot more social dynamics in play. Bigger groups are more fun because of mob mentality and hi-jinx. In small groups I see a lot more cautious play. In large groups any given player is more likely to get bored and pull a lever given the chance just to feel like they’ve made a decision. It’s a lot to balance.

All that to say, I don’t cancel games unless everyone cancels. I like changing things up. My rule is we just pretend like the other players aren’t there and never were and we try not to get into too many weird “but player X was holding my potions!” scenarios if possible. So, Everett-07 and Jimmy Cobb started off on the landing area for floor 3.1 the Maintenance Zone. This (sub)floor is one of seven that make up the third floor (3.1-3.7) which contains all the manufacturing facilities in the Deep. The crew was looking for floor 3.4 and particularly for room C045 - Animal Storage. They’ve abandoned their original mission of trying to convince Roja that she isn’t an android, since they’ve all had their brains scanned and now realize there’s no way to convince Roja that she isn’t an android without doing her bodily harm. And now they’re just focusing on trying to retrieve a synthetic dog from Animal Storage for Arkady to buy.

They started out in C01 — that’s in the purplish square above on the center right side. This floor had no gravity, so they floated north to the Meeting Room, where they found an android corpse floating above a meeting table, head bashed in from some blunt object. They’re looking for some way to get to Floor 3.4, which they don’t know is to the south of them. “Is there anything valuable in here?” is something my players have started asking a lot. They’re getting totally desensitized to seeing Android corpses strewn about. 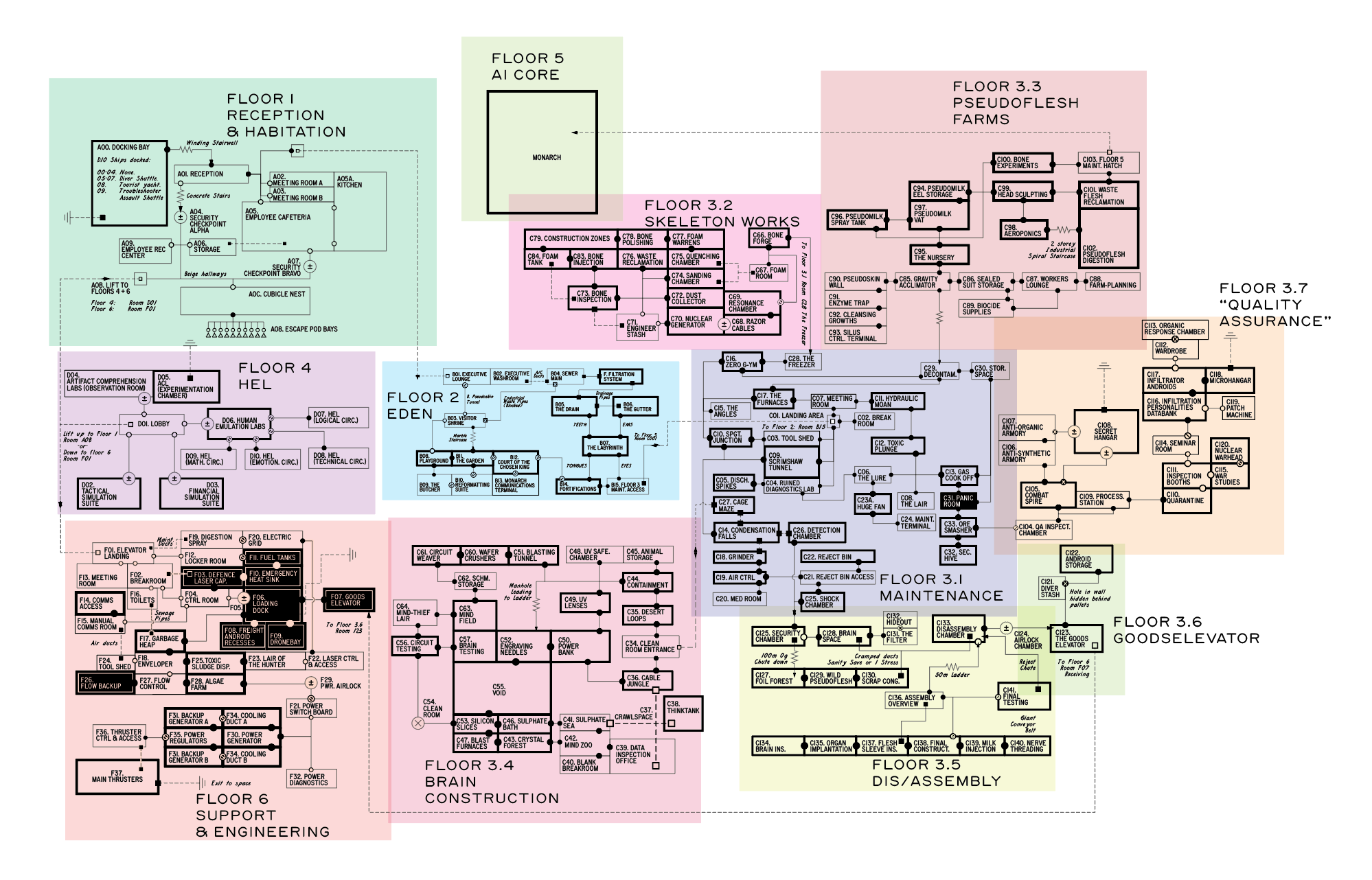 I roll a random encounter check per room, twice in big rooms, and once every ten or so minutes that my players talk or make plans. The procedure is pretty basic:

Jimmy and Everett decide to head east to the Furnaces. Jimmy’s plan is to always go left and hug the wall so they don’t get lost, and both of them want to avoid vents/duct work if they can so they’re not constantly shedding equipment. The Furnaces are massive, eight giant glowing furnaces surrounded by floating candles that appear to be android fingers lit up at the tips like ET’s fingers. The crew snag a couple to use as glow sticks when a few people in beat up vaccsuits approach them from behind a furnace.

The leader of the group has their left arm severed below their elbow and their vaccsuit is patched up to compensate. When asked about it, they say that its from an old wound. They introduce themselves as tourists: Gatsby, Kask, Ozu and Wince1. They were separated from their Divers, Ëngstrom and Yannik in a room filled with razor wire to the north in the Skeleton Works. They beg for help but Jimmy and Everett aren’t having any of it. 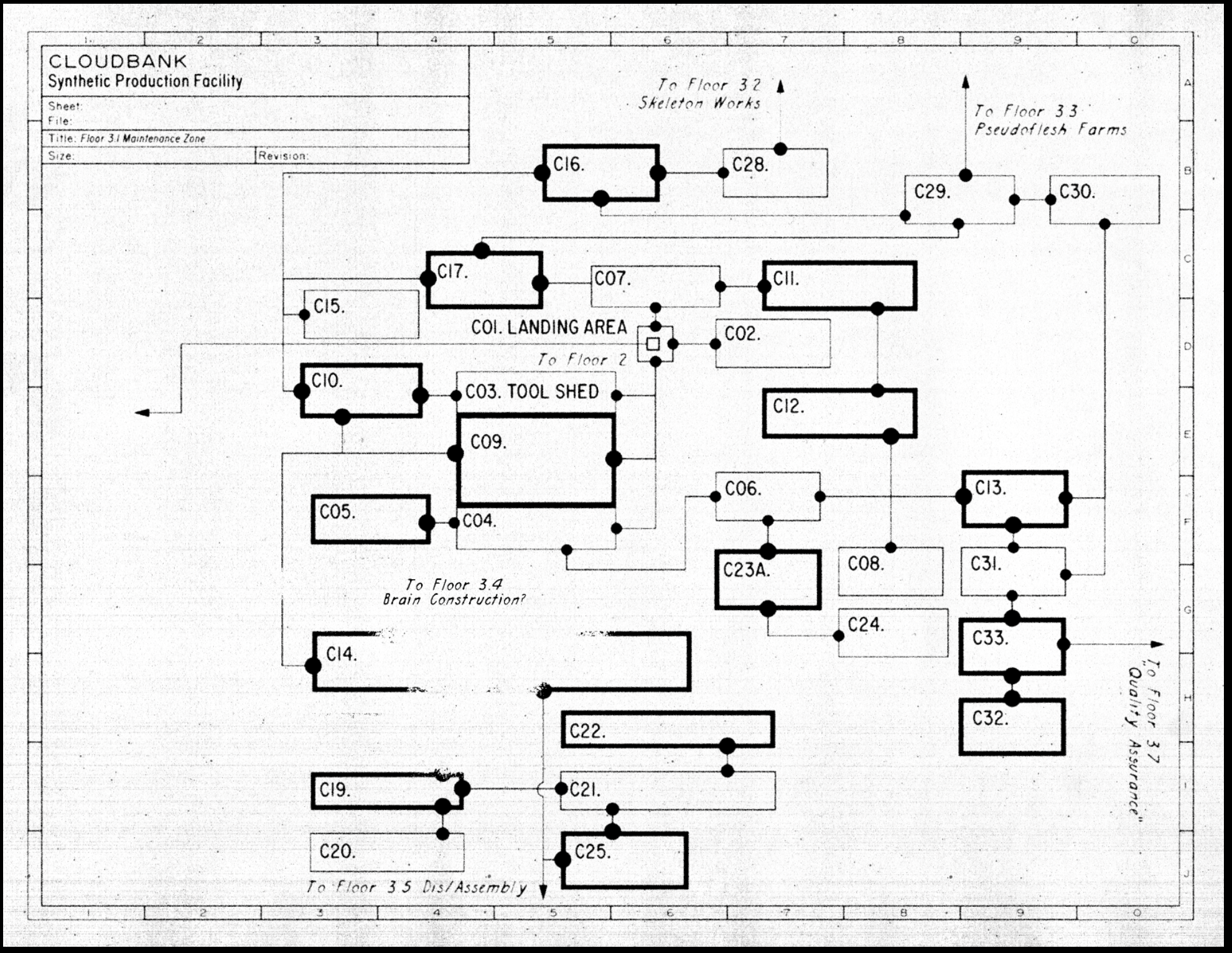 Everett asks whether they’ve seen any maps around recently and I sort of clumsily give them this player aid for 3.1. I’ve been slowly building these up as I finish the maps for Gradient Descent. The goal is to have something structured but with out any “secret rooms” or hidden paths marked on the map, and with very minimal labelling. This way players can make decisions and fill in the map as they go. It makes for a good in-world prop.

To get to floor 3.4 they decide they’ll need to head west out of the furnaces through some air ducts and try to make their way south to the blank spot on their map where they think they’ll find a way to get to 3.4. They can’t carry everything with them though, so Jimmy decides to give his laser cutter to Gatsby, however with the battery installed backwards in case Gatsby tries to use it on them. Gatsby and co. seem relieved to have a weapon and kind of awkwardly stare at Jimmy and Everett as they make their way through the vents.

They head south and then east and end up in C10: Spaghetti Junction. A weird patch work of cables with no discernible function. They keep moving. South this time and then west until they end up in C14: Condensation Falls. A huge vertical cylinder filled with slick wet chains and floating droplets of water. They experiment with the chains a bit and then decide to explore, looking for a way out. This part of their map doesn’t have any info, but they know there’s something around here.

They find a small hatch and a maintenance tunnel with handholds that leads them south for a long time and then lets them out in C34. Clean Room Entrance a sign on the airlock door says Floor 3.4 Brain Construction. They’ve made it.

They’re excited, but keep moving. Inside the clean room are three security androids with their logic cores ripped out. Everett gains some Stress and they move north. They’re officially off their map now and I didn’t have a player aid ready for this level. They find themselves in C35, a weird room filled with sand, slowly filling all the time. I mixed up rooms C35 and C34 on the map also, which didn’t end up mattering because they went north to C45. Animal Storage.

One interesting thing about megadungeons in sci-fi is a lot of times you’ll be dealing with urban mapped structures. In our case the room numbers on the map correspond to the room numbers in world, so the room really is called “C34. Animal Storage.” For my players this tends to keep them searching like you would for a house whose address you have, but don’t know the street very well. “Okay C44. we must be close…” That kinda thing.

Animal Storage is like a small vet’s office. There’s leashes on the wall and a stun baton (which Jimmy takes). There’s 8 large cages in the room, 4 of them closed with seemingly asleep dogs inside. One of the cages is ripped open from the inside.

They split up and do a sweep of the room. Everett heads over to an exam table and finds a huge synthetic wolf growling behind it. They bought experimental EMPs for this reason, but Everett isn’t sure if they’ll affect him in his new upgraded android body. He decides to throw one anyway. He takes some Stress from the EMP but doesn’t black out. Weird.

The robodog is knocked out however, and all the lights in the room go out too. They drag the dog back to his cage after some discussion, but right when they’re getting it into the cage the lights flicker back on and the dog wakes up. Jimmy tries to zap it with the stun baton, but the dog grabs it in its mouth. Everett finds the disengage switch on the back of its neck however, and shuts the thing down.

There’s a small discussion about which dog to bring back and Jimmy makes it clear that he doesn’t want these dogs harmed. They take the smaller domesticated looking dogs (one of them is blue and purple), strap them to their backs, lose some more gear, and decide to head back.

We zoom out a little bit and I roll encounter checks (and make some notes about needing a better “we leave the dungeon” procedure). They make their way back through the megadungeon though, not really running into anything, Everett is able to pick up an artifact that they had stashed on the second floor. And then back at the top they actually run into Gatsby and co. again, this time they’re waiting for a shuttle out of the Deep. Gatsby is excited to see Everett and Jimmy and wants to swap stories back on the Bell. He thanks Jimmy for the Laser Cutter, though admits he didn’t have to use it. They all hop on the shuttle and head back and we ended the session there.

This dive had a pretty big death toll and one of the missions was aborted. The player aids are a huge hit and so need some focus and attention after all’s said and done so that they can get used easily people’s games. I got some good notes on rooms that need better descriptions and all and all we had a good time. Can’t wait for the next session!

Oh also, if you hadn’t heard, we recently opened up pre-orders for Gradient Descent on backerkit. So if you missed the kickstarter, you can pre-order the print/PDF copy of the module right now and get it right after copies get shipped out to backers. We also have print copies of our pamphlet modules Hideo’s World and The Haunting of Ypsilon-14 for pre-order as well as the first ever Mothership t-shirt. It’s definitely worth a look if you’re interested. You can check it out here. 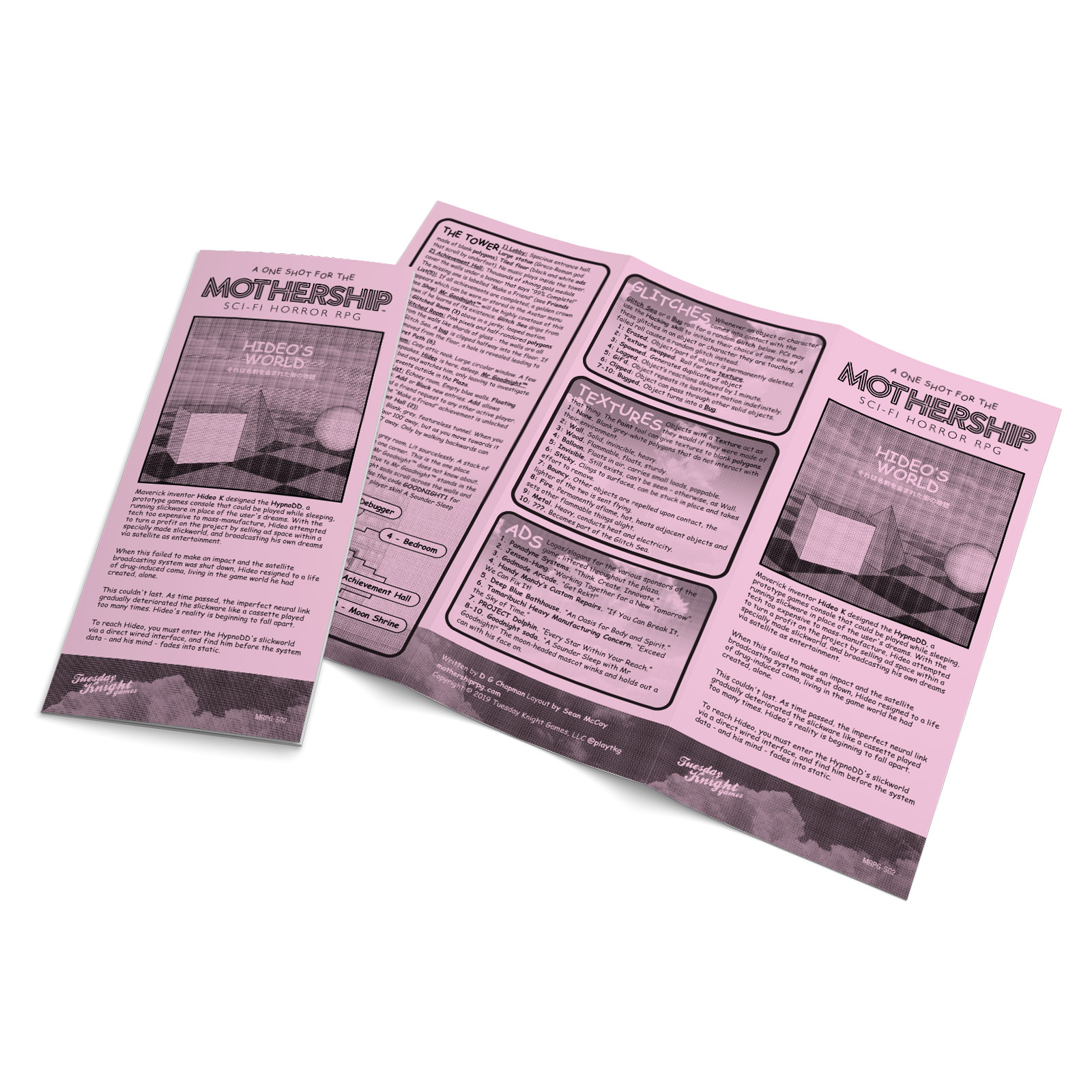 Mockup of the Haunting of Hideo’s World

Gradient Descent Dive 05: Session Report [Mothership] Five sessions into our Gradient Descent playtest as of yesterday, and the team is recovering from a near TPK last session with some fresh blood....