So you might have heard that last week we released Dissident Whispers, an anthology of 58 original rpg adventures in support of Black Lives Matter, and more specifically to raise money for Bail Funds. 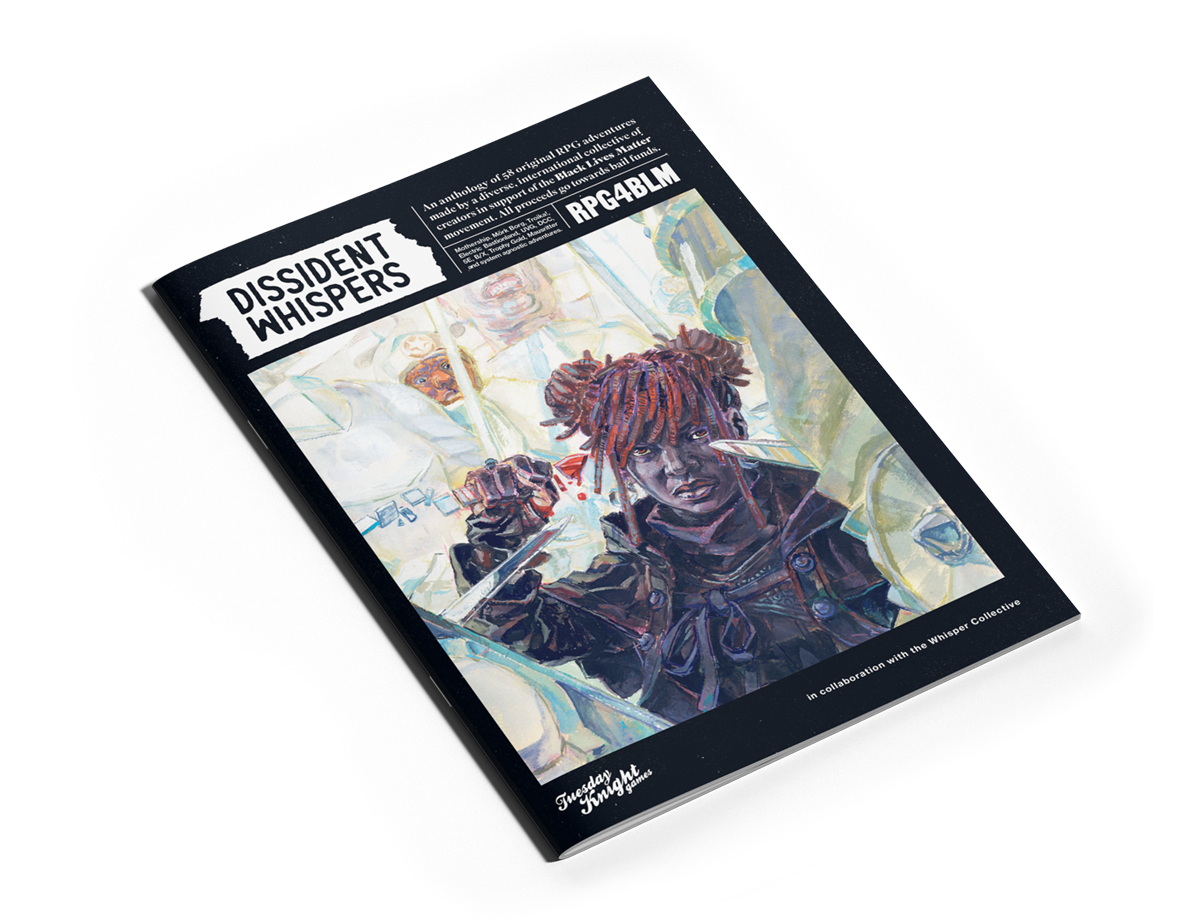 Dissident Whispers by the Whisper Collective in partnership with TKG

This project was in direct response to the Black Lives Matter protests currently underway across America and the rest of the world. Over 50 volunteers worked on this project over the course of 10 days to put together this amazing book, and I couldn’t be more proud of the work they did. Here’s how I got involved:

A little over two weeks ago one of the Mothership Discord Wardens, Jeremy Childrey (aka Galgorian) messaged the other Wardens (moderators) in our moderator channel and said they had a friend that was doing a charity bundle type thing for BLM and they wanted to post in our Discord about getting volunteers. I wish I could say that I leapt at the opportunity to get involved, to mobilize our community for the greater good, to use every bit of my platform to help those disenfranchised, but instead I asked a bunch of dumb questions: Would this be Mothership related at all? Who is the person asking? What’s the right channel for it? My first instinct was to protect the Brand™.

Jeremy is Black and put up with my stupid questions with a lot of grace and patience, like I imagine has been required of basically all Black people in America for the past two months (and then more broadly, all of recorded American history). Yes, people could submit Mothership modules if they wanted, no it wouldn’t be specifically Mothership related, their username is Silver Goat, I know them, they’re cool, we could post it wherever you want, I just think it would be a good group to help.

It took me basically that long to snap out of it and pull my head out of my ass. For context, I, like I imagine a lot of you, had been anxious and feeling out of control for the past few weeks trying my best to wrap my head around everything that was going on, figure out a way to help, get a sense of where I could do good. Elijah, our marketing manager at TKG had even asked me point blank the day before to help brainstorm ideas for how to get TKG more involved, and here was Jeremy, asking the smallest of favors, that someone, a friend, recruit people for a good cause, using our tiny corner of the internet, and I’m waffling like some kind of baby.

Jarrett, our editor, prodded me to do better. We put out an @everyone announcement to our 2,000+ discord members asking for submissions to help Silver Goat and this new book they were working on. We posted up a link to the discord where they were organizing volunteers, and that was that. I felt better that we had done something, anything. But I thought maybe I was done. That I had done my part.

Then the questions started rolling in. Ian Yusem, one of our best playtesters for Mothership, pinged me with a question: how long did I think submissions should be? What would a reasonable deadline for the project be? We’ve been putting together 1-page modules for Mothership for a few months now, so we had just locked this information down. I told Ian 1,000 words max if they want art and a map, and we should probably lock the whole thing down in a week, then take the weekend to collate everything and then release on a Monday. But Bail Funds are for people sitting in jail, so we don’t want to wait much longer. People need that money.

Ian asked if I’d step into the Dissident Whispers discord and tell everyone what I had just told Ian. It would carry more weight coming from a publisher than him. Sure, why not. I popped into the Discord and shared what I thought. Keep the word counts short. Set the deadline soon. There was already a ton of work going on. A Google doc to organize all the file submissions had been made. There was a Trello board to track the progress of individual pieces. Someone assigned me an @helper role and I was introduced to the other organizers. There were people brand new to RPGs in here next to seasoned pros. Marketing people, layout, writers, editors, artists, cartographers, podcasters. A plan started to form.

We needed a cover. It needed to be all these things. We wanted to showcase a Black woman, someone strong. Not a victim. But we didn’t want to fetishize her. We wanted it to be badass. We wrote up an art description. David Hoskins had volunteered to do a cover if we needed, a huge coup for us, David’s an amazing illustrator. I got tapped to do art direction. So I pitched it to him. And his response was, why are you asking me to do this? You need a Black artist.

You could hear people’s palms hitting their faces across the chat. We had reached out to some Black creators, but I saw a tweet from Chris Spivey that seemed to sum up where I was afraid we were heading. 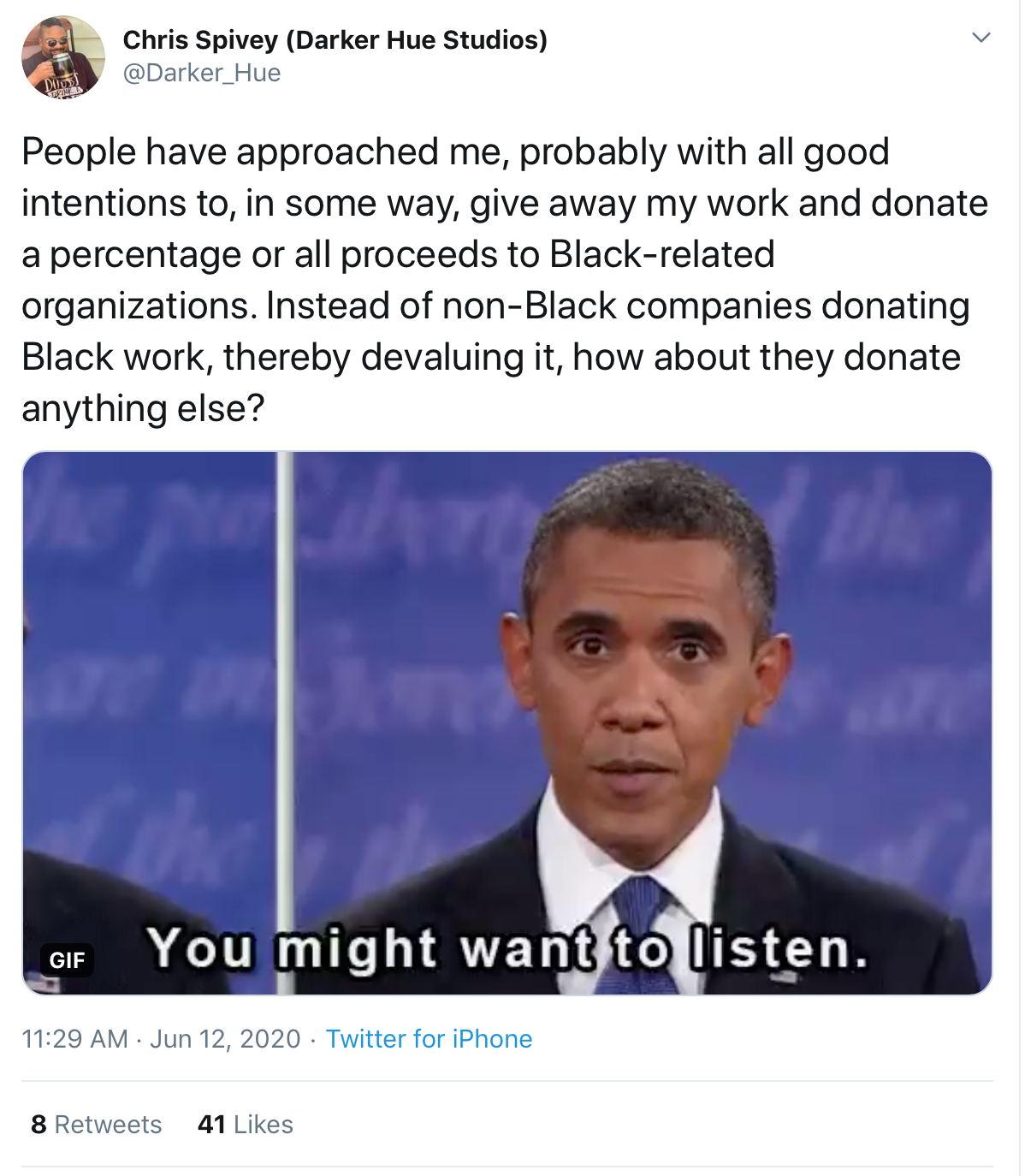 This is where I learned about my racism. I couldn’t think of any black artists. I have an extensive network in tabletop. Jarrett jokes about how connected I am constantly. It’s been a huge asset to be able to put together projects quickly by calling on contacts I’ve built up over the last ten years working in the boardgame industry. And my rolodex is coming up blank.

This is a red flag.

I put out a call on Twitter asking for recommendations for Black artists and I got a lot of retweets from people in my network and a little bit of engagement. I got pointed to a few resources, particularly of help was the #drawingwhileblack hashtag on twitter. These resources were always there, why had I not used them before now?

Because it wasn’t a priority to me to look for them.

This is the thing I’ve come to learn about myself while working on Dissident Whispers. Every morning I wake up and am complicit in a system of oppression. One that I can choose to actively resist or passively accept. I think the lie I had internalized went a little something like this, hum along if you know it:

I am not a racist. Therefore the things I do are not racist.

My identity and belief of myself as “not racist” precedes any sort of action proving this one way or the other. “I’m not racist, so if I don’t know any Black artists it’s just the luck of the draw. I just didn’t happen to meet any. Or none reached out to me.”

I think this is an easy lie to live and its very comforting to have the privilege to think of yourself as one thing without ever having to prove it. “I’m rich, just don’t check my bank account.”

I was living on social credit, but deeply deeply in debt.

My desperate flailing on twitter worked. Chris DiDonna from the Mothership Discord pinged Misha B from Black Girl GameWorks who tagged in Jabari Weathers who knocked the cover out of the fucking park in record time.

I reached out to the wonderful Laura Simpson who I had met last year at an RPG symposium and whose amazing game Companion Tales got nominated for an ENnie last year, to see if she’d be willing to write the intro for Dissident Whispers. Which she absolutely nailed.

I wrote this post at the urging of Fiona Geist, one of the Mothership developers and a good friend of mine, not as a redemption arc, but as a call to other publishers and game designers that you have to start somewhere if you want to get anywhere.

For me and my corner of the industry, it starts with hiring. Hiring more Black people, more people of color, more women, more trans, queer, and gay people. The next step will be about being more transparent with how we pay people to help set better pay standards in the industry. After that it’ll be something else, and then something else.

As Jarrett likes to say, we need to “do the Work.”

But you have to be actively resistant, and not make any assumptions about yourself, who you are, and what your motivations are.

You have to learn to crawl.

Dissident Whispers has sold over 1,500 copies in the last week and raised over $45,000 for Bail Funds. It’s currently the Number 2 best seller on DriveThru RPG. All proceeds go to Bail Funds. Get it here.

Gradient Descent Dive 07: Anatomy of Bad Session We had session 07 of our Gradient Descent Playtest a couple weeks ago and it didn’t go so great. Let’s get into it. Joining us tonight: Ian...