My Infatuation with 2D Maps

Inspired by Jeff Rient’s Vaults of Vyzor and Natalie Bennett’s Sewers of San Draso, I’ve been working on a new megadungeon campaign for my B/Xers called the Sewers of Sarakesh. I’ve always loved that old Moldvay style side-view map1 and I wanted to see how hard that would be to emulate in illustrator today.

Apparently it’s pretty easy to do, and a lot of fun. So here’s a rough draft of the Sewers with the names blocked out so you can print it up and write your own level names in the spaces. 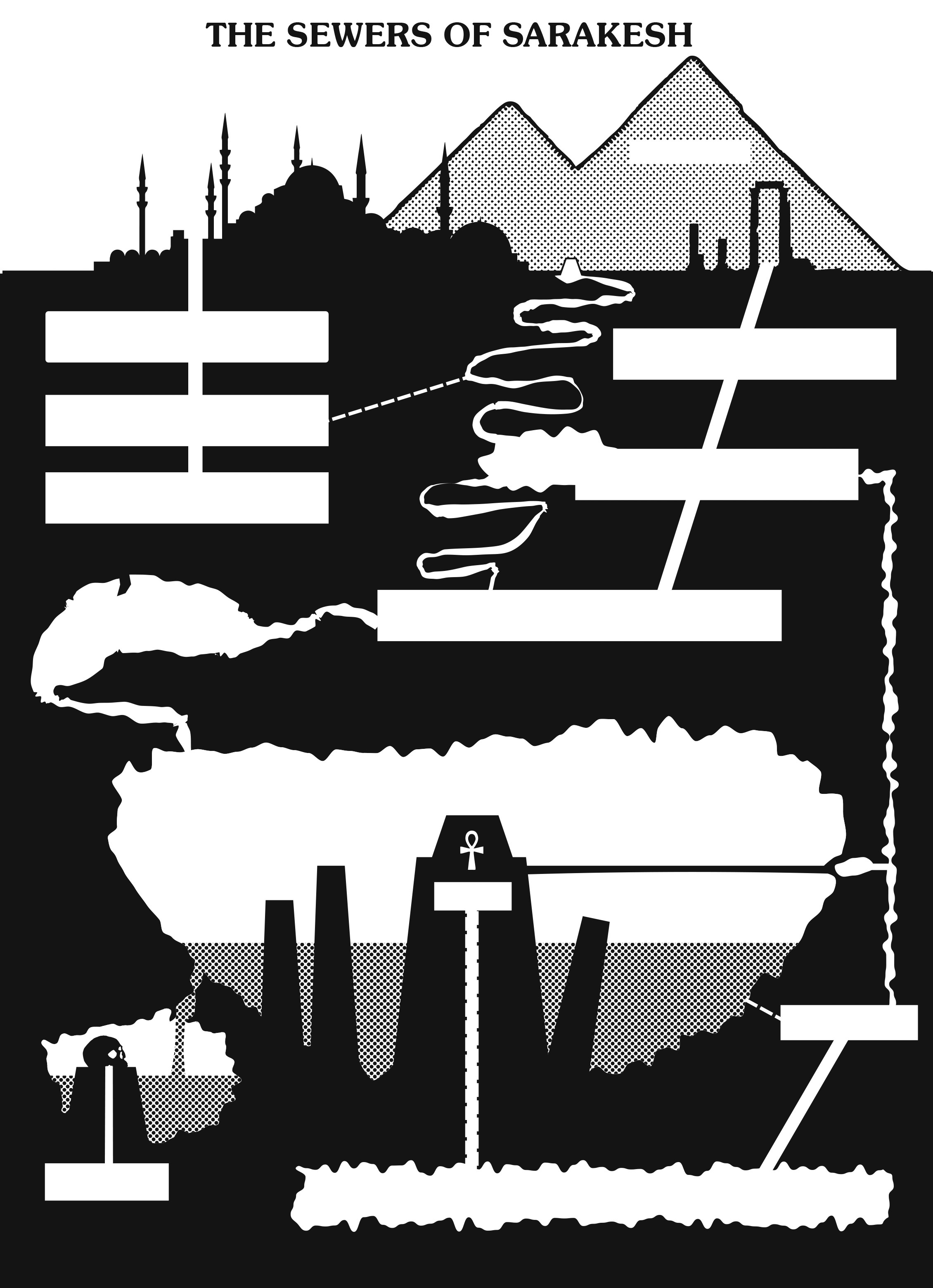 Cross section of the Sewers of Sarakesh

While I’ve been working on this, I’ve been going through some eBayed old modules, particularly B2 The Keep on the Borderlands and B4 The Lost City. I’m taking Jeff Rient’s idea that a lot of DMing is about making connections as opposed to inventing stuff whole cloth. 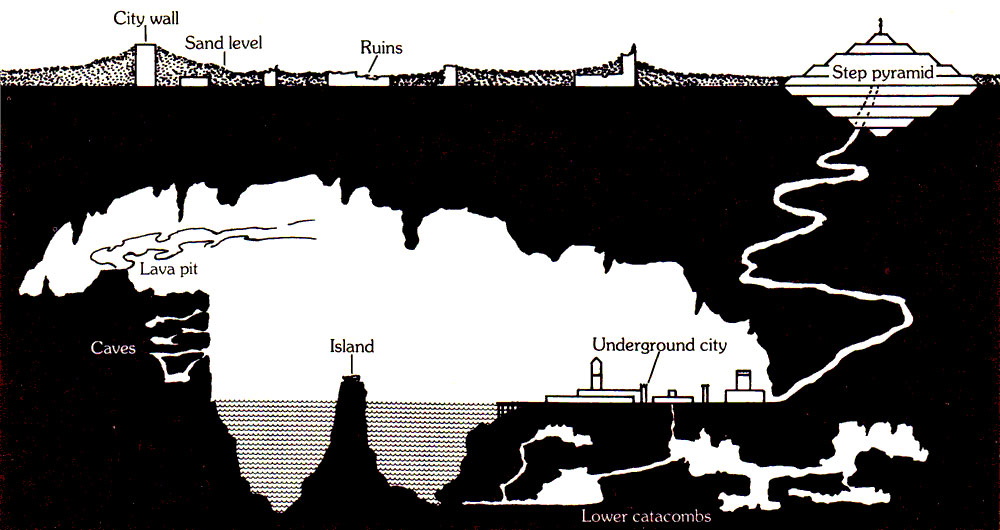 Cross section of module B4 The Lost City

For instance, the pyramid at the top of the sewers - I’m just going to steal the step pyramid from the Lost City (pictured above), change up the key and do a little pallet swapping. The real question will be how does the step pyramid from the Lost City connect to the other dungeon levels, which themselves, for the most part, will just be stolen, re-tooled, and re-themed dungeons from other products, mixed in with some of my own.

The titular Keep from B2 is really just a good, functional model of a working keep/castle to steal and place in your games. The NPCs don’t even have names in the module. You just rename them, refigure the numbers of guards, merchants, NPCs wandering through, mixup the layout of the keep a bit and the terrain it’s on, and boom, you have a pretty well thought-out functional keep for your games. In fact my biggest complaint with B2 is that there isn’t like an executive summary top-sheet for the Keep with all the information you may need (how many guards on duty, how many total reinforcements, total citizens, how alarms are sounded, and how many people respond when they are). This is all pretty boring routine stuff, so I get why it’s not included, but when planning a siege adventure at the keep, I’ve had to total all that information up myself (which was pretty easy to do), so that may be worth releasing at some point.

Even my campaign map will be stolen, since I literally can’t find a better hex map in the world than the one that came with Divine Right (it’s even more beautiful in person). 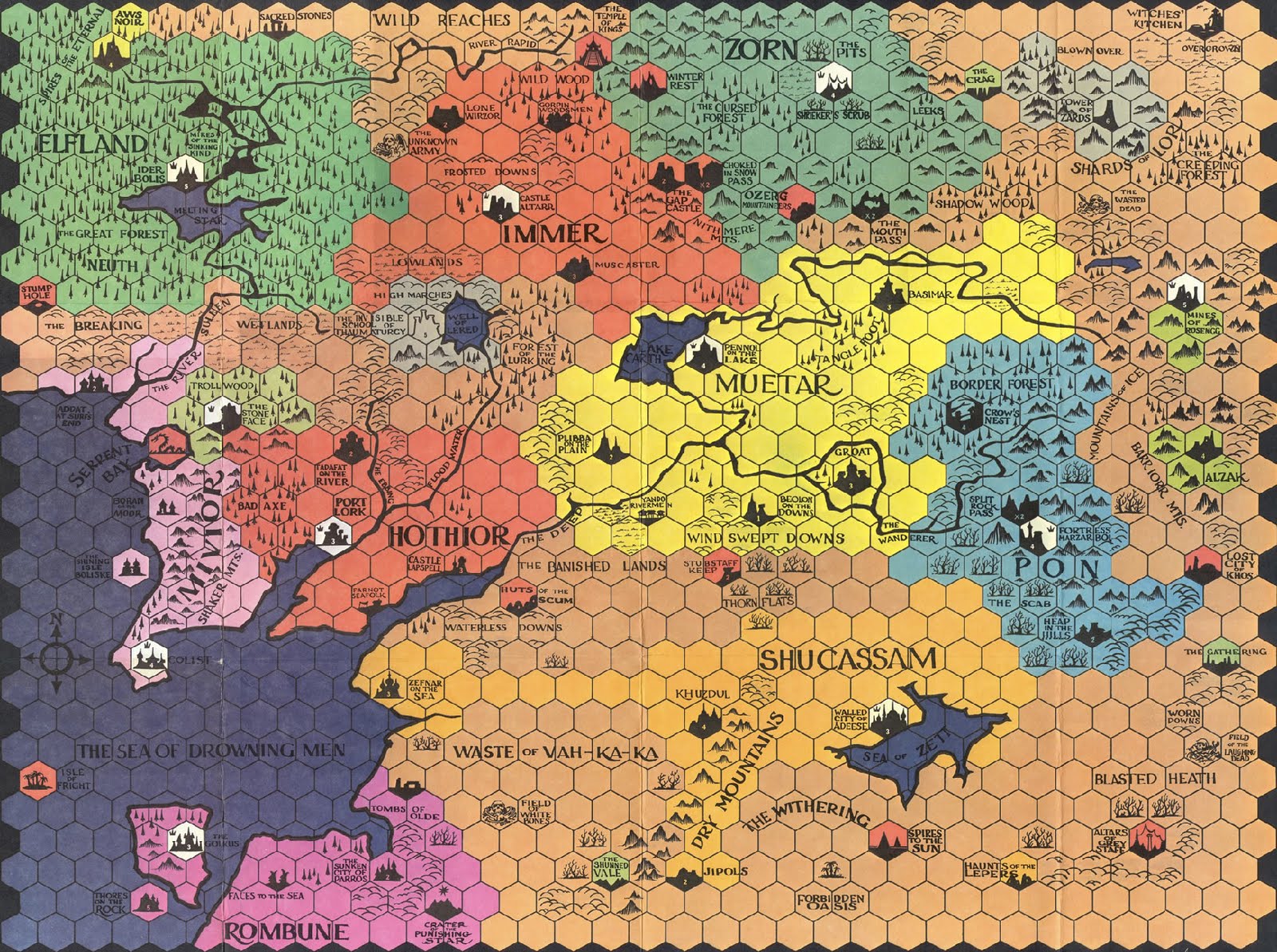 Map of Minaria from the TSR game Divine Right

Now a lot of the basic work is done here in the map itself, where is the stuff, what’s it called. But I know that Muetar on the hex map (the yellow nation in the middle) will probably be Yoon-Suin. The Sewers will be somewhere in Shucassam (the orange hexes). Where will Vornheim go? I’m not sure, maybe I’ll change it to Zornheim and put it in Zorn.

I think of a good campaign is built a lot like a comedian’s act. You’re goal is to build a large wealth of material, which you can then you pull from depending on the audience, crowd, or situation.

The details of Sarakesh will be filled in over time, and through play, but I’m starting with the below and building from there.

Sarakesh In Twenty-Five Words or Less2

This is all almost entirely stolen whole-hog from Natalie Bennet. But it’s my starting place. All the gp awards are awarded in total to surviving party members each session and then divided up amongst them and their retainers as per usual. 1xp per gold recovered, plus carousing.

What Are the Guards Doing? In preparation for my new campaign, I’ve had to scrounge together a lot of random tables from old notes. Here’s a list of 20 things that the city...

Building Better Magical Components When it comes to casting spells in my D&D games, I like the tactics of oldschool Vancian magic (preperation, one time use, powerful spells, wide...