I got a small lot of Fighting Fantasy Gamebooks in from eBay today and I cracked open the first one, The Warlock of Firetop Mountain to play over dinner (the girlfriend is out of town). I talked a little about it the other day, but if you don’t know, the Fighting Fantasy books are basically the UK’s Choose Your Own Adventure books, but with a light game system strapped on top. The series was created by Games Workshop co-founders Steve Jackson and Ian Livingstone, with plenty of art from Russ Nicholson. So if that doesn’t at least make you curious, then I don’t really have much to offer here. 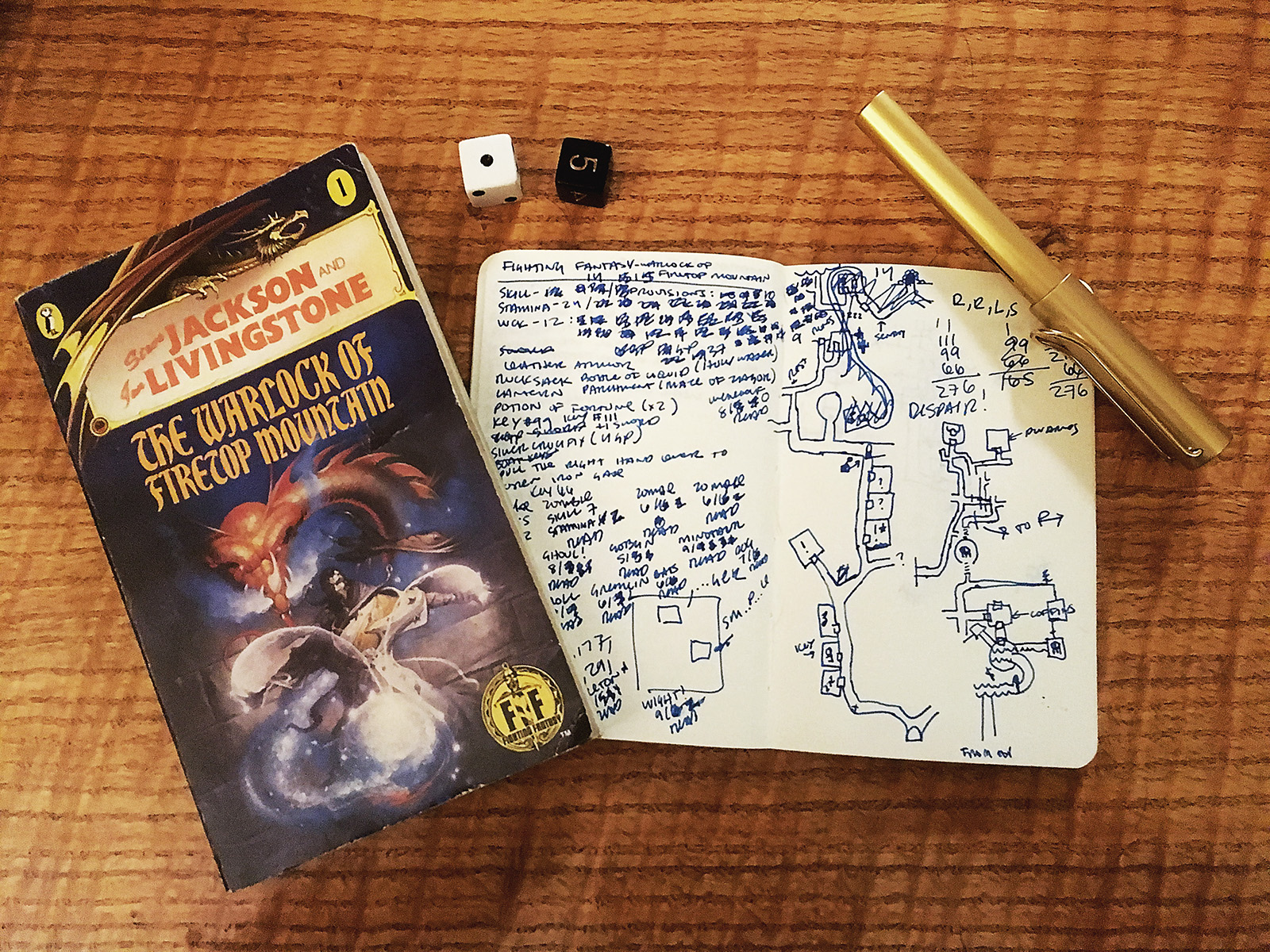 This is basically all you need to play one of these. Pen, paper, a pair of d6s.

Now these are solo-play adventures where you read some boxed text, pick an option, roll 2d6 generally, and then see what happens. It’s actually pretty similar to what Lamentations of the Flame Princess uses in teaching new players how to play an RPG and now I’m wondering if it’s because of these books.1

Pretty much spoilers for the entire book ahead.

The Warlock of Firetop Mountain is the first entry in the series, and has been converted into a video game as well as a module for the new Advanced Fighting Fantasy 2nd Edition game2. The module was recently reviewed by Fear of a Black Dragon, an OSR podcast.

Being the first in the series, Warlock has pretty much everything you’d expect for a youngster’s first dungeon crawl. You hear rumors of treasure guarded by an evil warlock in the eponymous mountain. Off you go.

There’s a decent amount of combat, or can be, in this gamebook. In total I killed:

Which brings me to a pretty common complaint about the gamebooks. The character creation system is super simple, but very swingy. Roll 1d6+6 for Skill (Which is your attack and stat rolls all rolled into one), roll 2d6+12 for Stamina (Your HP), and then roll 1d6 + 6 for Luck (Your saving throws and a sort of “bennies” system).

The basic combat system is roll 2d6 + your Skill and try to roll over your opponent’s similar roll. So if you start with a 12 in Skill, you are GOD. If you start with a 7, things can be rough, or you’ll need to avoid a lot of combat. You can avoid damage or do more damage by “testing your Luck,” which means to roll under your Luck on 2d6. Every time you do this your Luck goes down by 1. You gain Luck by finding magic items, hordes, and defeating monsters.

My first character rolled had perfect stats. 12 Skill, 24 Stamina, and 12 Luck. I thought that might not be fun so I rolled again - this time getting the lowest possible stats, 7 Skill, 14 Stamina, 7 Luck. That also felt kinda shitty. So I rolled again. 11 Skill, 24 Stamina - okay this was getting ridiculous. I kept the God Mode character because it was getting late and I was curious how easy the game could be on Easy Mode.

The Dwarves, by Russ Nicholson. These guys definitely added to the Mythic Underworld feel of the dungeon. They’re just there. No apparent explanation. But they act like the world around them is their world and it make sense in a dream logic sort of way.

Well the short answer is, pretty easy. Very few combat encounters posed any threat - only really the Warlock posed a threat at all, and even he didn’t stand much of a chance. And the other thing is, if you have a high Luck and Skill, then you’ll defeat monsters easily, which means you’ll be restoring your Luck more often. You’ll hang onto your Provisions (which can heal you at certain designated points), which means you’ll need to use healing less, etc. Basically, you don’t have to worry about your internal economy at all. By the end of the gamebook I racked up:

This is on top of the sword, leather armor, lantern, and two Potions of Fortune (luck potions) that I started with. In short, I took everything that wasn’t tied down.

The hardest part was navigating the map (which you’ll need to create to be of much use in the game), but this part was pretty fun for a solo game. In the second act you’ll have to navigate a maze with trapdoors and teleport traps and secret panels and a Mazemaster (which is something I’m going to steal) and some cool just weird rooms, like some Dwarves playing cards that are lonely because of all the monsters they have to avoid.

Like I said, this is a great starting game for people brand-new to the hobby, or nostalgic collector nerds like me. I bought six of these with the intent to gift them to my ten-year old nephew to see if I can get him into the hobby. One of the main benefits that’s been ascribed to the gamebooks is how quickly they can get kids into reading, which I can definitely see. I would’ve killed for this game as a kid. 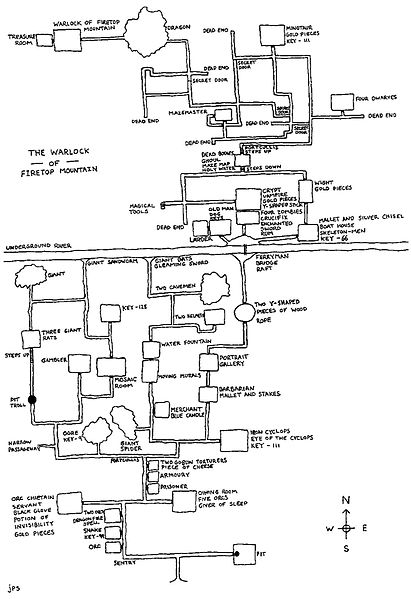 A Map of Firetop Mountain

Here’s a map of the gamebook, which obviously ruins a great deal of the game. A huge part of these games is not knowing what lies behind any door, or corner, but I was pleased to see that so far in this series, there are very few “turn a corner and die” endings like you see in a lot of Choose Your Own Adventure books. It feels perilous, and certainly with worse stats I can see how it would be. Which makes me think that rolling your stats doesn’t really add that much to the game and does harm it quite a bit from a balance perspective. I don’t think balance matters that much in an RPG because you can always find another solution, or at least retreat, but there’s really no retreat in the gamebooks, you move forward or you put the book down and move on with your life. So either having stable starting stats or having a less swingy table if it’s imperative to get players used to rolling for stats.

The maps are an interesting way to look at a D&D map specifically because these maps are designed more like video game levels, in that they are a series of loops and choices (see Mark Brown’s Boss Keys videos for more on this). So you can actually study them as level design in a way that I wonder how many RPG designers actually do. Everything you do in a FF gamebook is predicated on a choice. The whole book’s structure only works if there’s meticulous accounting of the choices players made. There are dead ends, and forks, and then chokepoints. There’s a critical path, that players have to go down to move the story along, but there are also branching side quest like paths that eventually come back to the main story - or don’t, depending on if you die or not. So the gamebooks are a good study in the very basics of good adventure design: making your choices matter. The game obviously severely limits your options, because it is a limited book, but it does its best to make those limited choices meaningful. I passed a door that was silent, and then a door where someone was weeping, and then a door where someone was screaming. I only went in the door where there was someone weeping. But I made that choice because of the information I was given. I think a lot of RPG writers just put in content and then lean back on “Well the game is really all about the GM and the players and how they handle it, so you know, you don’t want to overwork it.” and then they forget about these basic fundamentals of good design. I don’t want to make the gamebooks sound like paragons of dilemma or anything, but it’s at least right there in the text that they’re aiming at the right thing.

All in all - I don’t have a ton of complaints outside the character creation system. The mapping is fun, the choices are usually well telegraphed (except for one time, when I tiptoed through a room of corpses that I thought might be undead, and then when I passed them the game was like “You’re having second thoughts about passing those corpses, they’d be so easy to loot!” So I was like, ah what the hell, let’s do it and went back. And sure enough, they were zombies. So, shame on your book, and also shame on me for falling for it.), but overall the game does a good job of letting you listen at doors, try to talk down enemies from attacking, looking for alternate ways around, and even search for secret doors and risk wandering monsters! There are times when I want to just read a module front to back, and this scratches the same itch essentially. They aren’t the most creative books by any stretch, but they definitely have charm and a few gameable ideas. You add that to the gorgeous art and I can think of worse ways to kill a couple hours.

Designing a Character Sheet for Castlevania If you haven’t read Brendan’s post over at Necropraxis about ablative armor then you should do so. I’ve been looking for something like this for...