A Small Rant about Investigation in RPGs

I posted the below thread to twitter the other day and it went off pretty well. So here it is in full so that it’s easier for me to find later:

First note: I like to play RPGs like an escape room, not like an improv session. I like Fiasco and Mountain Witch and a bunch of other games - but for the MOST part, I’d rather play a hard RPG with a lot of problem solving1 rather than one about building an interesting story.

So a lot of investigation rpgs solve this kind of thing mechanically. Either by giving you an investigation roll, or a “the PCs always find the clue because they’re badasses, the rolls show how much resources the use or what skill they use,” that kind of thing. I don’t like that.

I looove detective fiction. I want to “be” a detective in an rpg. I want to solve the puzzle. Boardgames like Tragedy Looper and Sherlock Holmes: Consulting detective do this well. RPGs do this poorly.

This first problem is GMs and games don’t want to account for a fail state. This can be solved pretty easily with a few things, one is just: let them fail, lose the client, the murderer kills again. The other is to let the enemy get closer and closer to the PCs as they continue to fail. Meaning that regardless of what path they choose, the situation will eventually resolve itself (either with a confrontation on the PCs’ terms at the enemy’s hideout, or a confrontation on the enemy’s terms, at the PC’s hideout, amongst many other combinations). 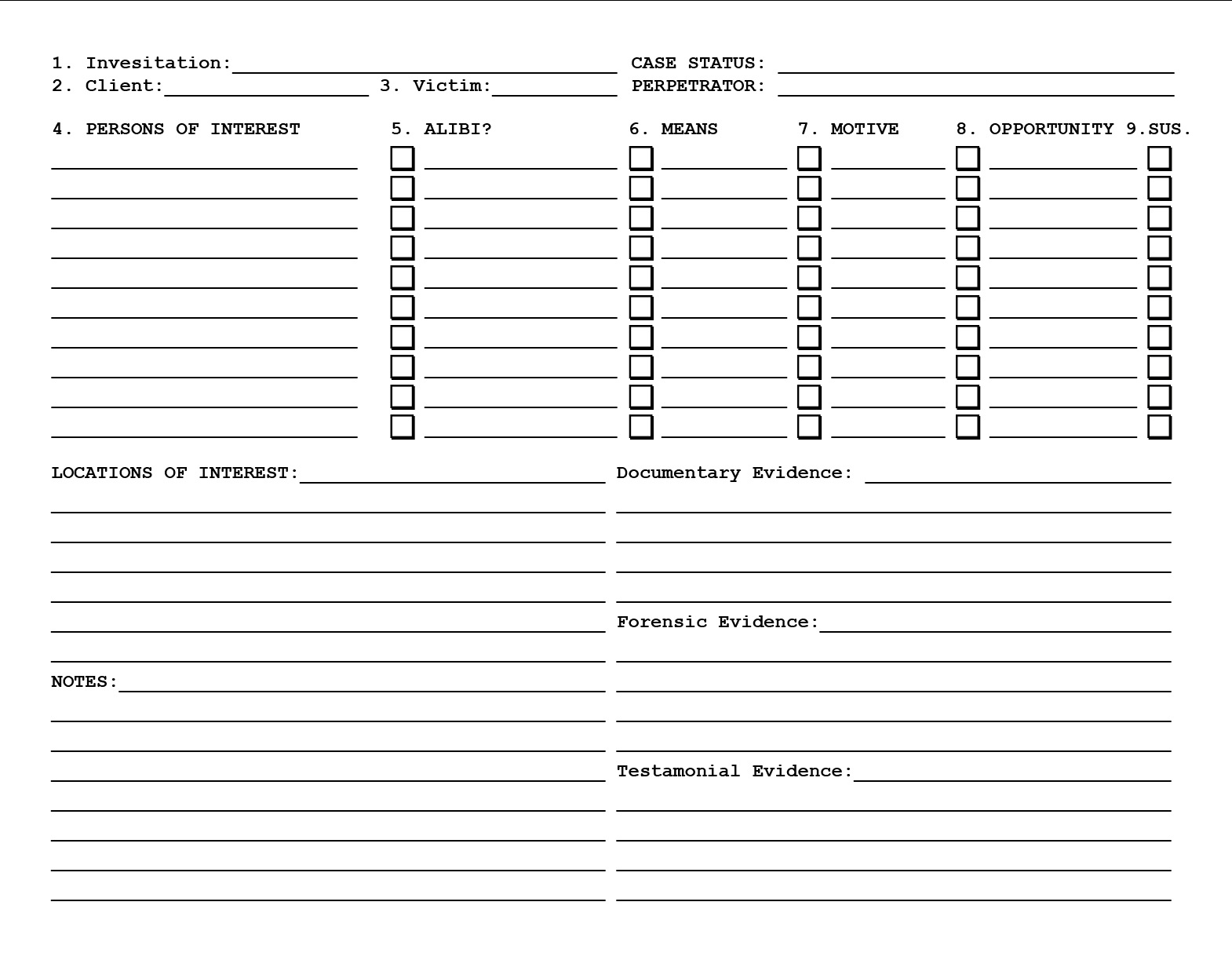 I’m a graphic designer, so my big thing is info design, and I think one thing that needs to be rethought is the investigators character sheet. I want a really simple character sheet, but more importantly I want an investigation sheet. 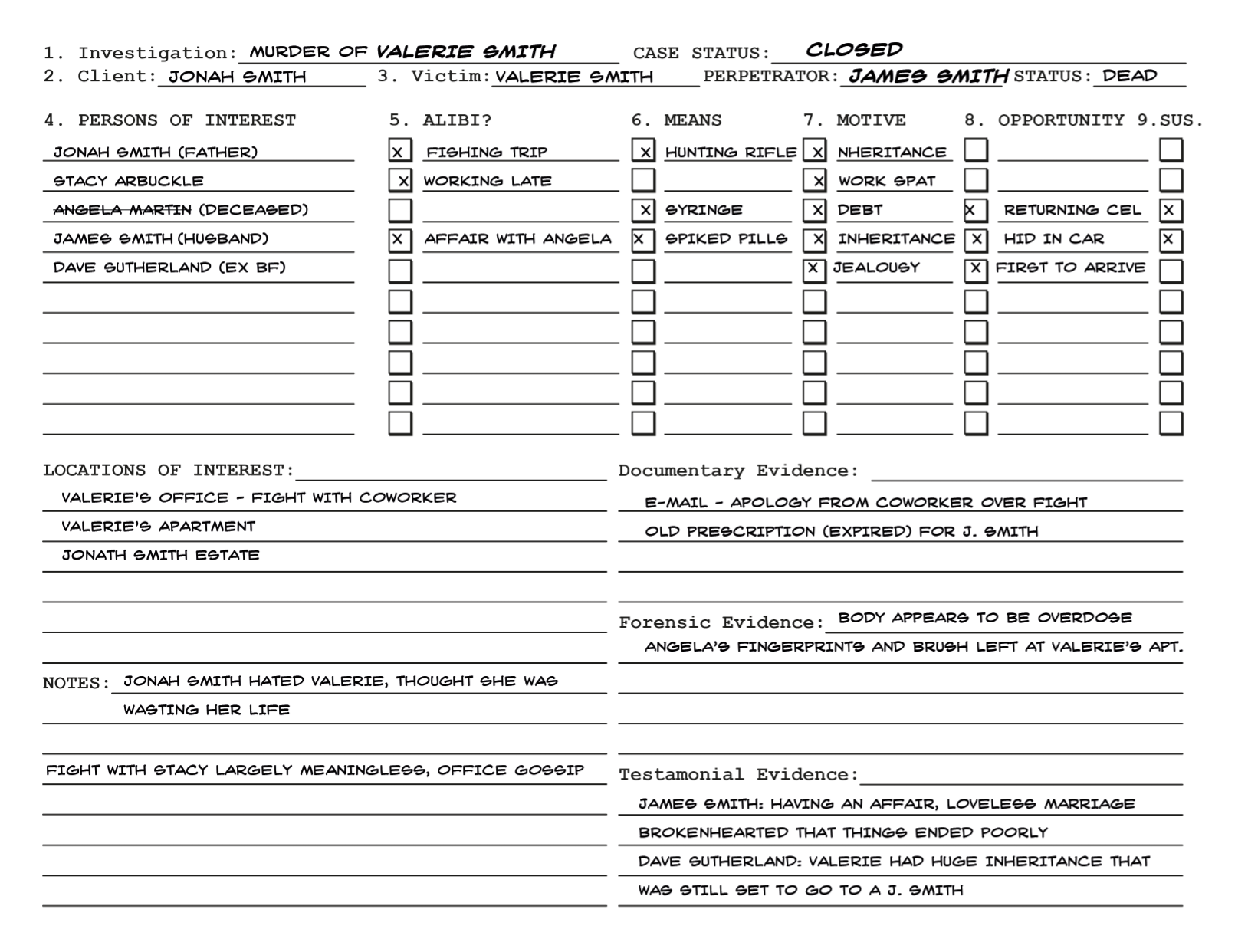 When it’s filled out it should look like this.

See the thing is, players or a lot of players, don’t know how to run investigations. And most games COVER for this by saying just roll a die and you’ll win. I mean, you don’t know how to fight right? And d&d still works doesn’t it?

Here’s the difference: in a fight players are aware of the general tactical options. Right. Retreat. Use their abilities. In investigations, players know they should look for clues, but generally don’t have a strong grasp on when they’re closing in.

The big thing in the Investigation sheet is it teaches WHAT notes to look for. What to write down. When you might be closing in. “Does this POI have an alibi? No? We should make note of that,” and then you know, actually make the note.2

All of this is handled and modeled at the table. You can save the mechanics for adjudicating more interesting pieces of uncertainty. Instead of “did I find the clue” it’s “did I get shot.”

I think a GREAT investigation rpg has a very minimal character sheet. Maybe one field of expertise (biology, forensics, bank fraud) health stats (athletics, combat) and then a load of contacts who stand in for skills.

You don’t have “criminology” as a skill. You instead have a contact at the morgue. And these contacts can be killed. Introducing more fail states. You have to protect your network.

Another cool thing is you can now easily have multiple open cases. Or refer to old closed cases or cold cases even, looking for clues. Hey that murderer we never caught, are they a serial killer? Better check those open case files for similarities.

This is something I’m working on. But again, my aim here isn’t to create a compelling narrative, it’s to make actually doing the detective work fun. I think this is a step in the right direction.