One of the big things we’re tooling around with in Mothership is adding Carousing as the primary way of gaining experience. Right now, you currently gain XP for surviving your session and then are awarded extra XP for achievements (killing enemies, mapping unknown sectors, etc.), it’s workable but I think we can do better.

Here’s the straight dope with my design notes below. 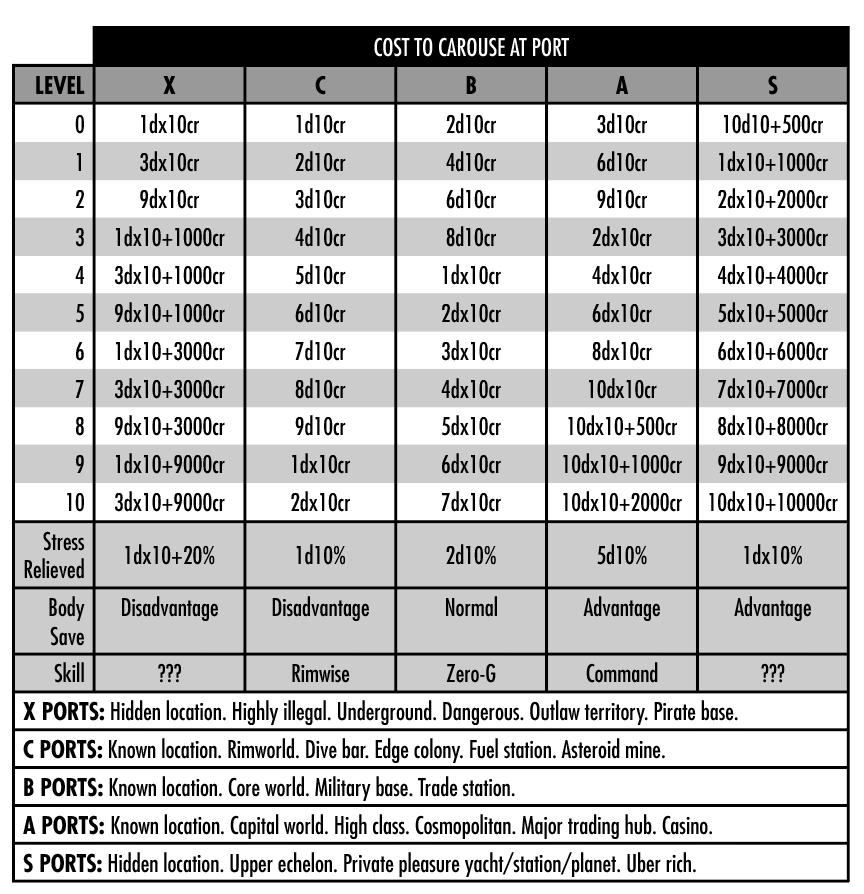 Print this out for your notebook or GM screen

One other consideration is that PCs shouldn’t be able to camp out and carouse at the same place over and over. I haven’t found an elegant way to put this, so basically, they need to hit the road and do another job or something before they can carouse again. I don’t mind them revisiting the same locations over and over but maybe doing so should be at a disadvantage. Or maybe the simplest way to do it would be if you carouse at a location without having first gained more Stress or left for a few days on a job, you’re at disadvantage to the body save, the stress reduced, and whatever result you might roll on your mishap table. Just sitting around drinking is likely not going to have a positive effect on your situation.

Oh also note some of our new dice notation. Instead of underlining when we’re rolling the ten’s die on the d10 (d10*10 essentially), we’re now calling that 1dx10 (which would give you a result between 10-100). This seems more intuitive to a lot of our players.

So, what’s this table about?

Whenever you’re between jobs, you can rest at a port. This can be a space station, gas station, asteroid mining facility, pleasure cruise, or just a city on the surface of some world. When you Carouse you reduce your Stress by the amount indicated (so 2d10% at a Class-B port) and then gain that much XP. You then make a Body save to see if you suffer a mishap (we’re still working on those tables). Mishaps could be addiction, an altercation, just a rough night on the town, maybe you only gain half XP as opposed to full XP from the Stress reduction because your hangover is so bad, etc.

The ports and their differences are explained above in the table, but the important thing is that Class-X Ports and Class-S Ports are hidden places that need to be earned or discovered by the PCs. You can just roll up and go drink with the Hell’s Angels. You need an invite or to have actively sought out those places.

Some ports have skills associated with them. These skills will apply to your Body save if you have them. Likewise, some ports are more dangerous than others. You’ll be making Body saves at Disadvantage at Class-X and Class-C ports.

This is some of the basic math behind the carousing table.

Here’s some of the math I’m working with, its nothing too complex and all the numbers are just averages. Class-X/S are very efficient at reducing Stress and so are more expensive. Then again, you’re much less likely to encounter them out in the wilderness. So grabbing a six-pack from a Class-C fueling station or whatever might just be what you’re doing. Knock down your Stress when you can and save up to blow it all on a luxury cruise if you ever find one.

Like I said above, the XP tables for the game are going to have to drastically shift to accommodate this system, likely mirroring something closer to a D&D progression, with XP requirements in the hundreds if not thousands of points.

The big thing is I like tying everything back to the Stress system. Stress is a killer and having a way to reduce it in game is a lot of fun for me. Plus the idea of designing the different ports (or generating them in a sector) sounds like a toolkit that would be a lot of fun to build. Fiona is working on the actual carousing mishap tables, and I’m sure those will be a lot of fun to read and help create a lot of organic play at the table.

I also like tying it back into the economic engine as just another way to drain credits from the players. Mothership has a lot of economic disparity in it and carousing costing more and more seems to fit that pretty well.