Where Do We Go From Here?

Last night Mothership against all odds won two highly coveted ENnies: the Gold ENnie for Best Game and the Silver ENnie for Best Adventure for Dead Planet. It would be a huge understatement to say I’m shocked and humbled.

Mothership started as a tiny pocketmod two years ago at Gen Con 2017 where it had its first playtest. At that same convention, Donn Stroud, one of my oldest friends in gaming and the man who got me back into RPGs, introduced me to Jarrett Crader, who had, unbeknownst to me, printed up a handful of Mothership pocketmods to pass around at the show. They say your first fan is the hardest to get, and Jarrett was Mothership’s first fan. 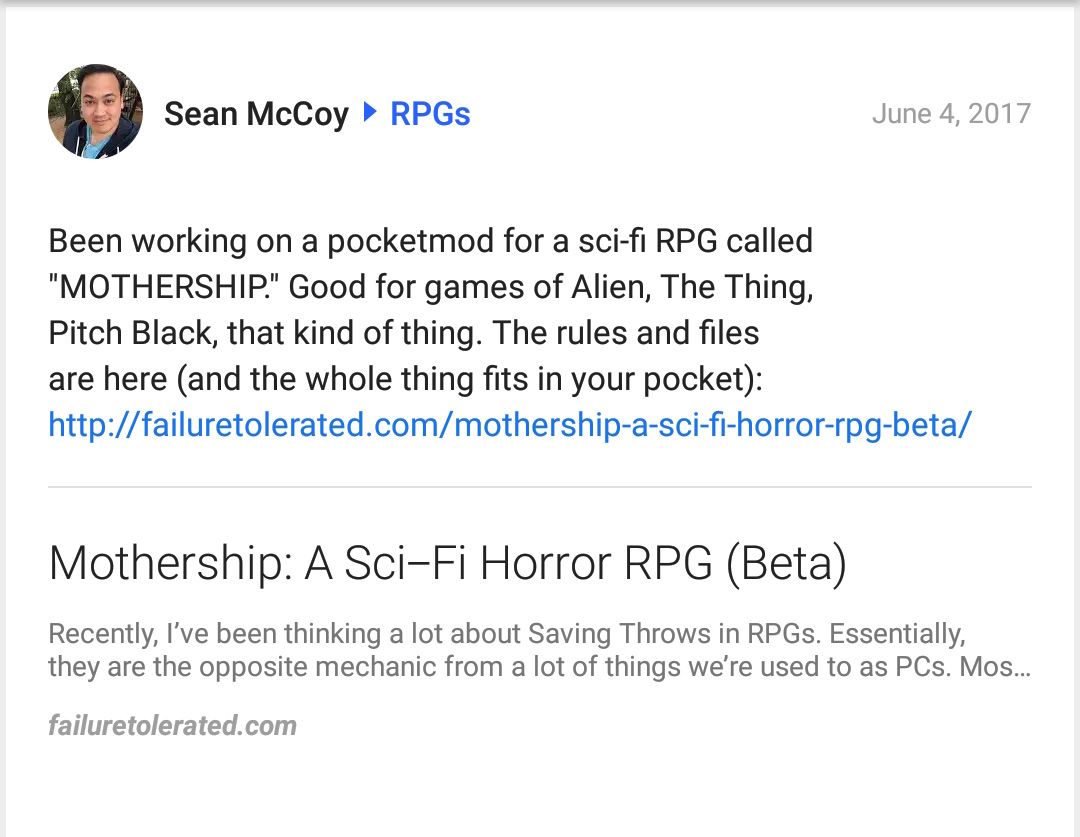 We released the Alpha version of the Player’s Survival Guide at Origins 2018 a year later almost as an afterthought because we had missed our print deadline for That’s Not Lemonade! and desperately needed a new product to sell. We only printed 50 copies for the first printing. Almost all our customers were people who had heard about Mothership on G+. Our customers were a totally different crowd than the happy-go-lucky party gamers we’d been servicing for the past five years. Small clutches of black clad horror geeks would walk up and ask for Mothership like we were keeping it in the back under plastic wrap. It was a small run but we nearly sold out. The biggest question we were asked at Origins was whether there was any content for the game. Donn and I agreed that for Mothership to survive we needed to get a module out, and fast.

Fiona Geist and I had only just recently met on G+ and I had asked her for feedback on the Players Survival Guide. She gave me detailed list of her thoughts and then wrote up the Trinket and Patch tables. I wanted her back for Dead Planet to see what she could do with more freedom. Donn pitched the idea of a planet with a dimensional gateway, sucking in ships from hyperspace, stranding there. And something about the creatures that came out of this gate, the Gaunt. We created a small group on G+: Mothership Developers. Jarrett, Donn, Fiona, and I quickly blocked out the project and set the timeline. In six weeks I wanted a derelict ship generator, a planetcrawl, a one-shot aboard a ship, and something else, maybe something on the moon? Everyone got to work. 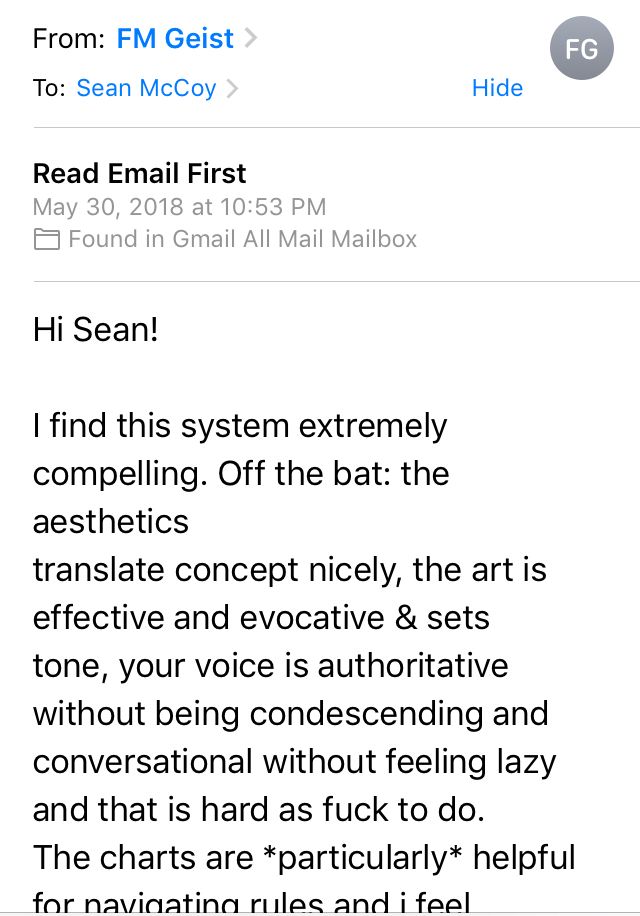 It was an amazingly rewarding creative experience. We were in each other’s business and stepping on each other’s toes. The planet got a multi-level dungeon: the Red Tower. Jarrett had us listen to Moon Colony Bloodbath by The Mountain Goats and with that the entire Tyrant Beggar Moon Colony was born. We switched the module from black and white to color halfway through. Fiona brought on Stephen Wilson as the artist. A week before Gen Con 2018 we sent the module to print and I escaped to a beach in Mexico with Lindsay to save what was left of my sanity.

Mothership for me has always been about solving one problem: why is refereeing sci-fi RPGs so much harder for me than fantasy games? There’s a lot of good reasons. Fantasy doesn’t have to make sense. The community making content is much larger. And a dungeon never needs a reason to exist to be fun. The sci part of sci-fi always implies that you need to know something about how space works, or what the tech on the ship can do. Good referees find ways to ignore or else are just extremely well read. Other referees feel paralyzed. I was the latter.

We released Dead Planet at Gen Con 2018 and were surprised to find that a small dedicated fan base was growing. I was an ENnie judge that year and my Judge’s Spotlight award went to Operation Unfathomable. After the awards, designers I had idolized stopped by the booth to snag Dead Planet. I felt like I was joining the community for the first time. During the show, Lindsay called me and told me she was pregnant. I pulled my business partner, Alan Gerding, and Donn Stroud away from the booth and we hugged and then cried. Everything was changing. 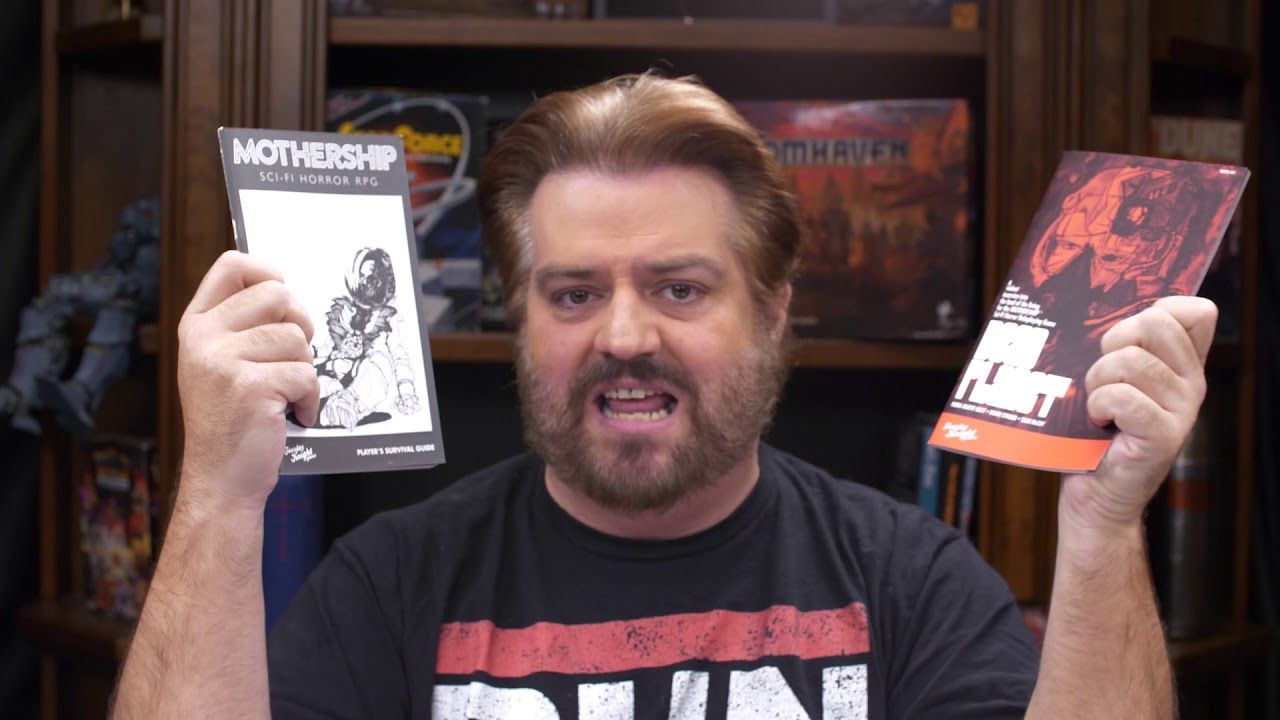 After Gen Con the Mothership DEVGRU hit the calendar hard, we commissioned four new modules and started drawing up a five year plan of releases. We Kickstarted A Pound of Flesh. Lindsay and I prepped for our baby to arrive and I stayed up late doing layout on APOF and making changes to the corebook. I was on discord 24/7 answering questions from the growing Mothership community. We took a last “pre baby” trip to Cannes and while I was there Matt Colville held up copies of Mothership and Dead Planet and told his thousands of YouTube subscribers that he wanted to run Mothership. Questing Beast called out Mothership as the go to game for sci fi horror. Things were escalating. We had no solution in store for selling physical copies of the game, Matt Kelley from Exalted Funeral was launching a store that focused on occult books and indie RPGs and wanted to carry Mothership, we set him up as our exclusive carrier while we looked for a more permanent solution. Matt kept getting the game into players’ hands and kept us afloat. 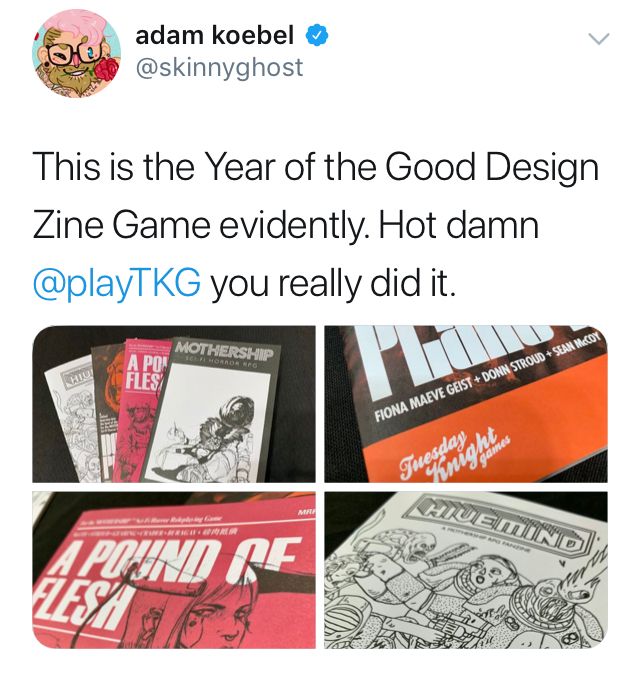 In March 2019, my son Langston was born and everything came into sharp focus. Lindsay and I started taking our sleep in shifts and between feedings I did more layout layout layout discord layout. Gen Con 2019 got closer. The ENnie nomination list came out. Four nominations for Mothership.

Here’s a cloverfield video from the ENnies this year when Mothership won the Gold for Best Game. Our team killed it on this one. Murder murder. I can’t say that enough.

As for me I’ve got two manuscripts for more Mothership books on my desk, another two getting written and playtested, and the final core books for a boxed set being outlined now and I couldn’t be happier.

Thank you for supporting us. 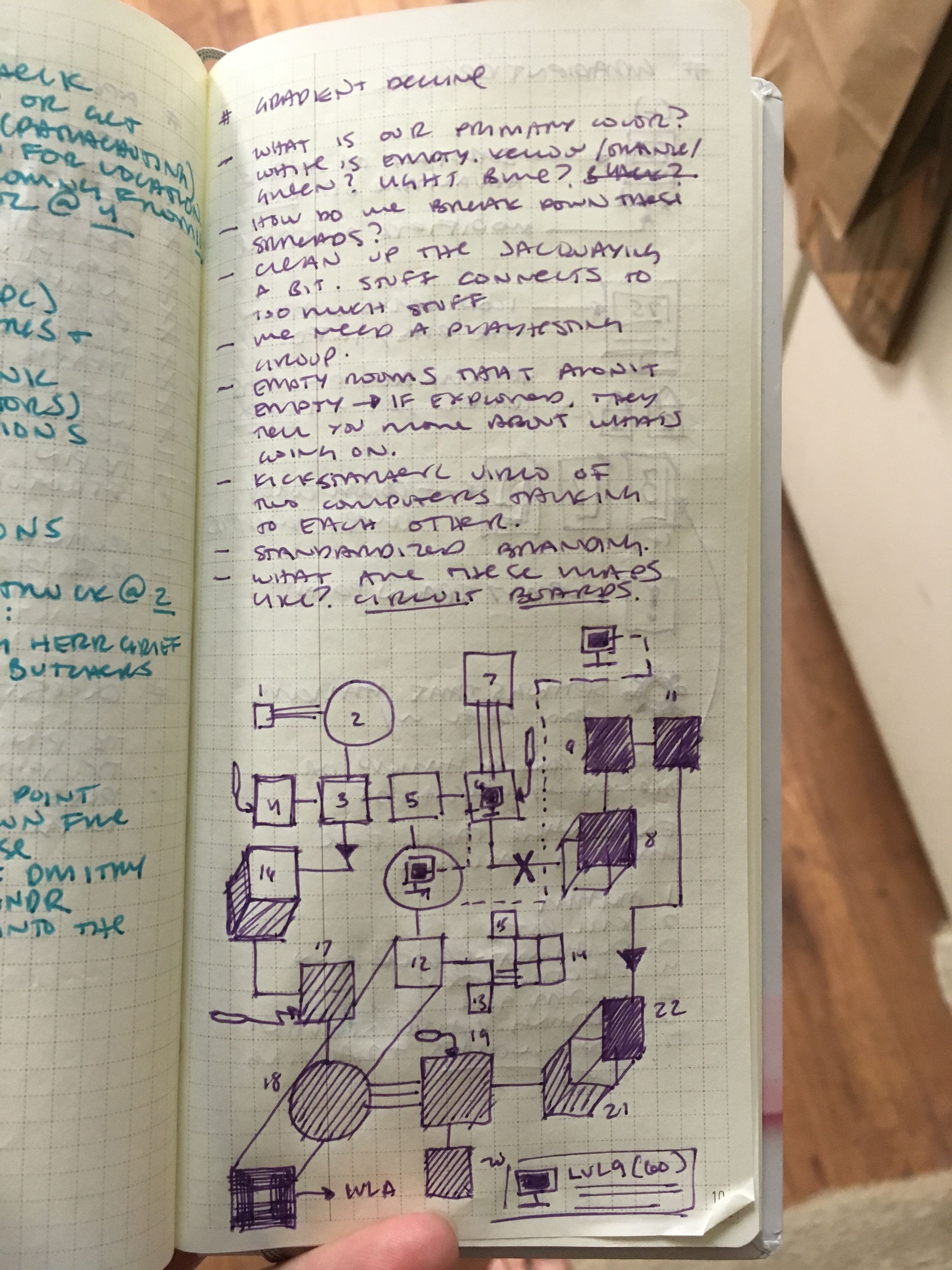 Back to work. Look for the Gradient Decline Kickstarter soon.

Mothership, the ENnies, and A Pound of Flesh This is pretty incredible. Mothership has been nominated for four ENnie awards. The Player’s Survival Guide is nominated for Best Rules, Best Game,...

Getting Better At RPG Twitter “TTRPG twitter is a mess,” is a thing you’ll hear everyone in ttrpgs say at some point. The broad strokes are that people talk past each other, that...