I’ve been playtesting Heist for awhile now, but we haven’t had many long shootouts. After tweaking the combat rules somewhat, I decided to run just a straight shootout last night (get at me if you want to do one of these) for my home group.

The premise is simple, you’ve just robbed a bank and the cops have shown up. Combat starts. Go. 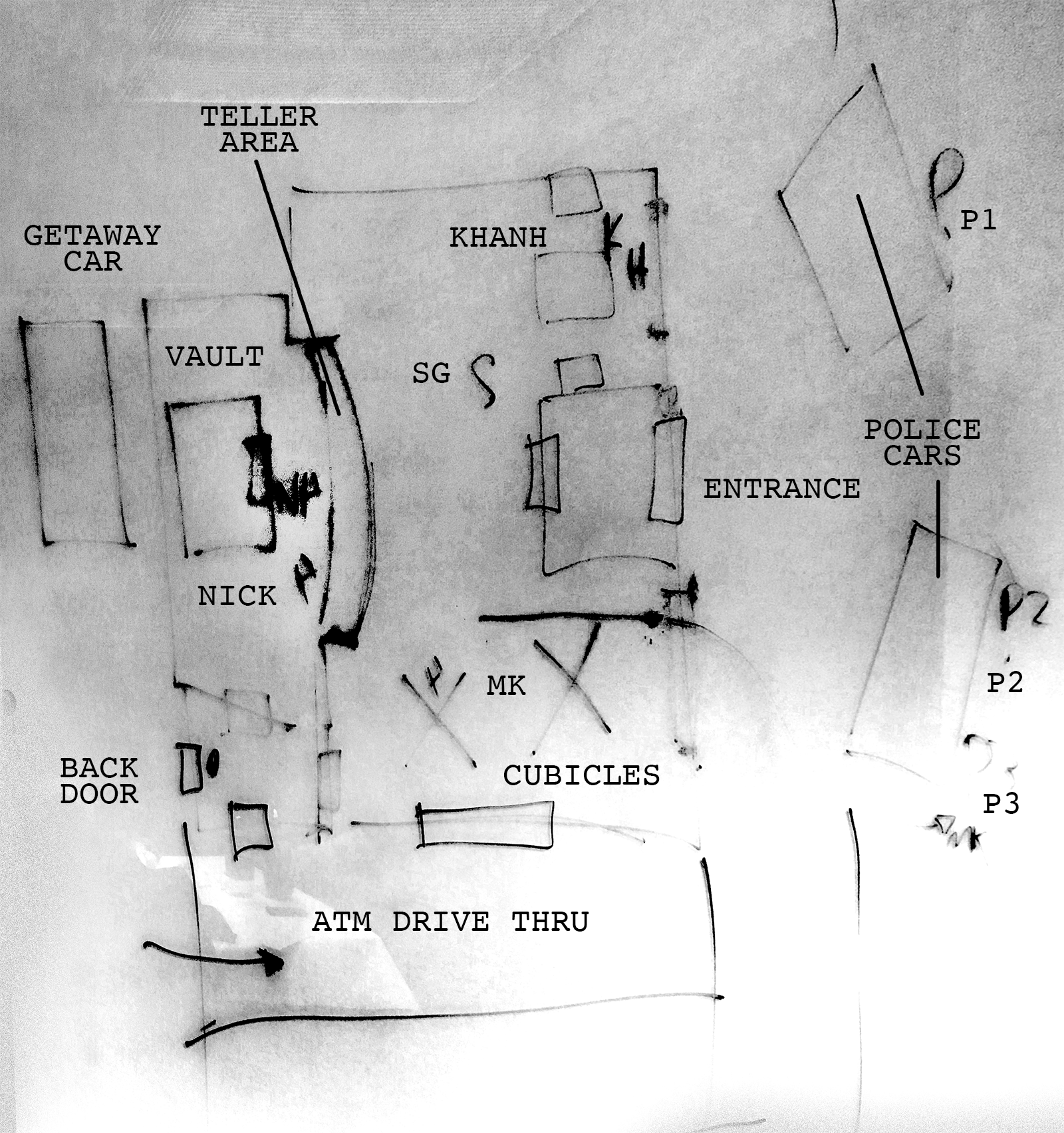 Our map of the shootout

“Come out with your hands up, we’ve got you surrounded!” The crew has just finished getting money out of the vault when a couple of cop cars pull up out front and three uniformed officers stream out, take cover behind their vehicles, and aim their weapons at the heisters.

MK, Nick, and Khanh all roll Reflex. On a TN-11 they can go at the same time as their enemies. On a TN-2 they go before, on a TN-0 (no successes) they go after. None of them succeed, so the cops have the initiative.

P1, ignoring standard protocol, advances on the upper right part of the bank, and takes a shot at Khanh, missing. P2 advances to the bottom left and takes a shot at MK, hitting him for a couple damage. P3 stays back at the cars and calls for back-up. I note down that backup will arrive at the end of the fourth round.

MK’s a poor shot, but he has a shotgun, he runs forward to P2 and fires through the window. He only deals 2 damage, however. Khanh takes a hostage and fires over them at P1 and hits for 3. The cops only have 9 HP each and the guns deal anywhere from 1d3+1 (the semi auto handguns) to 1d6+1 (Khanh’s AR-15) to 2d6 (the shotgun). We try and keep the numbers low.

Nick takes the bank manager hostage and yells to the cops to pull back or they’ll start executing people. He’s got a 6 Toughness and a +2 to Intimidate and a bonus die from taking the hostage, so he’s got a good chance of intimidating the cops into doing what he wants. He rolls and gets 4 successes (3 successes is usually the “hardest” setting), the cops will spend their next turn pulling back to their cars.

The cops make a quick retreat back to their vehicles to figure out what their next move is. I make a note to look into Intimidate and see if it’s too powerful. They all take up defensive positions and their turn ends. Two more turns until reinforcements arrive.

MK goes buck wild and hops out the front window and runs to the bottom most car where P2 and P3 are taking cover and fires his shotgun at them (“It’s a shotgun can I hit both of them?” “Did you bring shot or slugs?” “Let’s say shot.” “Okay let’s change the damage to 1d6-1 for each of them and a penalty die to hit.” “Sounds good.”). He hits them both, one makes an armor save (half damage) and the other doesn’t. P2 is at 6 health and P3 is at 5. Not as damaging as MK would’ve hoped and now he’s exposed.

Khanh moves forward to his window, takes aim and fires at P1 (who is behind cover and so imposes a penalty die) but misses, instead lighting up the cop car.

Nick feels like things are going sideways with his insane crew members and so takes the bank manager out to the back door and intimidates him into unlocking it so he can make a clean getaway.

Because the PCs attacked the cops instead of holding the fort down, the cops are no longer feeling intimidated. Both P2 and P3 unload on MK and riddle him with bullets. In Heist there’s a death save where on a 1-3 you’re dead, 4-5 you’re dying and will die soon, and on a 6 you’re alive and will wake up in several hours. However, you make this roll in a cup and flip the cup face down on the table. No one sees what the roll is (GM included) until someone checks on the body, then it’s revealed. So we roll and flip the cup and MK is out of the fight. Probably for good. P1 fires back at Khanh and hits him for 4 points of damage, but Khanh has 15 HP (Heist uses a tiered damage system, so Khanh has 5 Bruised wounds, 5 Bleeding wounds, and 5 Broken wounds before he dies), so he’s now bleeding, but otherwise okay.

A security guard who until now had been staying on the floor, bum rushes Khanh and they make opposed Toughness checks, which Khanh wins, smacking the guard with the butt of his rifle and dealing 2 damage.

Nick decides to take the bank manager to the car, and forces him to drive, taking up a position in the passenger’s seat. Normally it would not be a test, but circumstances have put pressure on the bank manager, so he makes a Reflex save to start the car this round and fails. It’ll be next round before he can start it.

Khanh hops out of the window and runs up to P1, flanking him, and then unloads. P1 goes across the pavement and dies. Khanh is hoping that Nick will swing around and pick him up. Nick will not.

Sirens blair and three more cops cars arrive with four more officers who start running out of their cars and taking up defensive positions. Officers P2 and P3 both fire at Khanh and together deal 10 damage, taking Khanh down. We make another secret cup roll and move on.

Nick has the bank manager pull forward through the ATM drive-thru and then dives out of the car and runs away from the bank (to the left on the map), going to ground. We end the playtest here and uncover the cups.

MK will die in 10 minutes, it’s revealed but is revived by paramedics. Khanh is alive with 1 wound, but unconscious. Both are taken into custody. Nick escapes, but will he be able to survive on the run with his friends in jail? Or will they rat him out?

This was a great playtest and we got a lot of notes (“Can we hold actions, like overwatch in X-Com?” “I want more options for different kinds of bullets.” “How likely is a hostage to get shot if I’m using them as a human shield?”) but the big thing was, this combat took about forty five minutes with some explanation of rules and gearing up. That’s a solid little session and the combat was tactically diverse and fun with a lot of options. I would be willing to run this kind of encounter at the drop of a hat pretty much at any con or anywhere else. At the end we can roll to see who lives or gets caught etc. and move on. For the full game, we’ll want planning and all that, but for now, it’s good to know we can throw down on a bank job if we need.