Today was one of those no prep needed days, which are always great. Everyone showed up ready to play and the sort of self-made hijinks just kicked into play.

They also have two NPCs remaining from their botched mission to Banquo IV: Lt. Edmund and Samuels’s co-pilot, Freya.

The crew of the KN-12 FALSTAFF left Banquo IV and it’s strange nanovirus plague behind and made the jump into hyperspace, heading to god knows where (their hyperdrive is malfunctioning).

Humans are supposed to sleep during hyperspace. It’s just better for them. Humans that stay awake during jumps go crazy or have visions or encounter duplicates of themselves from other dimensions. It’s just better to stay in cryosleep.

Androids don’t have to sleep, though some choose to. The Falstaff has two androids: Dr. Goodhealth who is largely helpful and Edward, who largely has his own designs.

Edward surreptitiously brought two samples of the nanovirus onto the ship. One of them he combined with some blood which sparked life into the thing and is now evolving and growing (it’s now the size of a small mechanical tarantula). The other he injected into their marine Lieutenant who had previously seen her entire squad turned into these monsters, just to see what happened.

While Edward was scheming away in the science lab, Dr. Goodhealth was checking the vitals of the cryosleeping crew. On his second check he noticed the Lt. was being overcome by the nanovirus and out of fear that the virus would spread into the cryochambers immediately let the Lt. out and shot her with his flame thrower.

The transformer and now aflame zombie Lt. attacked Dr. Goodhealth almost killing him, while fire consumed the room. Goodhealth had a second to emergency release the other sleepers, who woke up groggy and now choked with smoke.

Dr. Goodhealth got pummeled within an inch of his life while Edward (across the ship) ran to the bridge to sort things out remotely. Samuels ran from the room, as did Freya the copilot. Louisa attempted an attack, then aborted the attempt and ran for the cargo bay to find something to attack with. Ramona found a foam gun and attacked the creature and flames hoping to put it out, but rolled a 99 - the worst critical fail. The foam gun had not been serviced regularly and was completely empty. She failed a body save and passed out from smoke inhalation.

Dr. Goodhealth pushed passed the melting Lt. to get Ramona out of the room and ran for the medbay. Edward shut off the air circulation in the cryochamber and what’s left of the Lt. melted slowly in a pile.

The ship sustained decent hull damage during the encounter, the cryochamber was destroyed, as was a random stateroom from system overload. Don’t bring weird stuff on board your ship.

Ramona and Dr. Goodhealth healed in the medbay while Samuels and Edward reconfigured their Cybernetic Diagnostic Scanners to look for more of the nanovirus onboard the ship. This led to Samuels discovering “Seymour” the living experiment of Edwards design. They both (what??) agreed to keep the thing a secret until the crew “needed to know,” I suspect largely because Samuels has a perverse desire to see what happens when this creature eventually runs amok at the worst possible time.

We ended it there for the night (short 2.5 hour session) after Samuels failed a Sanity save and “saw” a new crew member, Jack, the first mate. The Falstaff has two more days before it leaves hyperspace, and with no way to get back to cryosleep things are gonna get weirder.

Next Time On Mothership…

Playtesting has finally started ramping up for Mothership and I’ve been able to run roughly a game a week. I recorded a one shot of Mothership for the Board With Life podcast and I’ll post the write-up as soon as that episode goes live. I’ll also be playing with some friends at Origins next week. 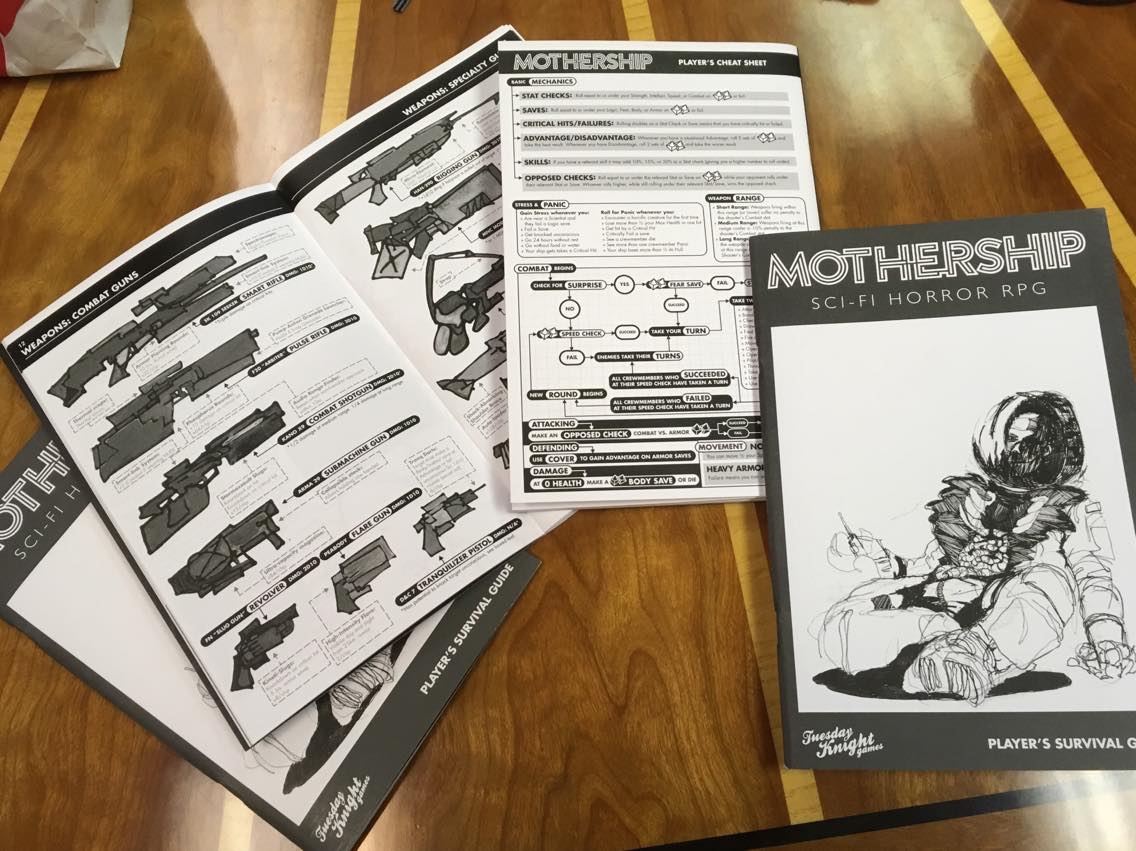 The proofs for the beta version look great

Speaking of Origins, we’ll be releasing the beta version in zine format for $10 at the Tuesday Knight Games booth at Origins. We’re doing a limited run of 100 and I’m hoping some people pick it up. We’ll also be giving away some postcards with some custom horrors for your Mothership game.

If you happen to pick it up and play it, please drop me a line and let me know how your session went. We need more playtesting to see what’s working and not working.

This version is the second complete version of Mothership, which was first constructed as a pocketmod a year ago for GenCon 2017 where we had our first session. I could not have done it without the incredible work of:

All of whom put in enormous effort getting this version (went from one page to 44) up and running and humming. You’d be lucky to work with any of them.

Escape from Banquo IV: Session Report [Mothership] Last night my home group had their second session of Mothership (my third playtest overall), they’re really starting to get into it, which has been...