I’ve been revisiting a lot of my graphic design chops recently, as a result of cool things like Sam Mameli’s 5e character sheet that attempts to put all the 5e rules for chargen on the sheet itself.

The biggest thing I’ve had to revisit is my sense of white space and margins. The most thing in graphic design for RPGs is that the thing you’re making is useful at the table during play. I almost believe that a character sheet should be unique to the individual - almost like a magical diary. Like if I pick up your character sheet, it should make almost no sense to me.

Regardless though - in all the games I’m working on now I’m asking myself how much information can I fit on this sheet? Can I teach people how to design a character just with the character sheet?

Mothership works perfectly for this, because the game was already designed to fit on a PocketMod, which you can download here, though it’s been through some changes since that file was built.

Here’s the character sheet. You can download the high-res version here 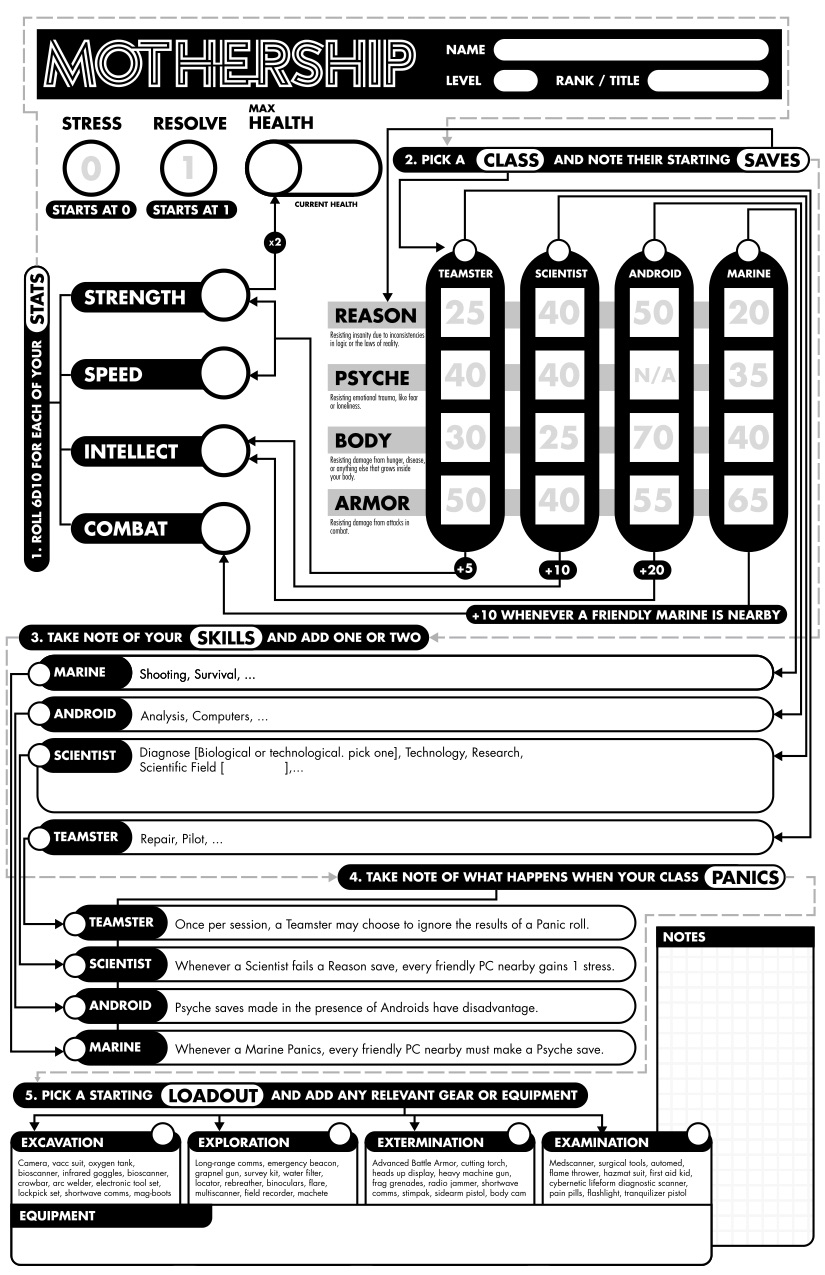 So, there’s a lot I want to tune-up about this, but I like where it’s heading. I probably need a big ol’ START HERE on the page, just to get things moving. This sheet fits on half an 8.5x11” so in future drafts I’ll probably just move it to a full on 8.5x11” and add more room for notes and sketches and that kind of thing. If this was a fantasy game, I think all the arrows and lines would bother me, but since it’s a sci-fi game I kinda like the circuitboard look it gives off.

There’s obviously a lot of repeated information on the page, since the game is meant for pick-up-and-play styles, so basically all the things about all the classes are on here. The loadouts need a lot more research1 and work, but I figured it was cool to basically leave out my least favorite part of chargen, which is passing around equipment lists. Though maybe I’ll just make a one-pager for equipment that can be copied or just checked off on the back of the character sheet, like a shopping list would be cool.

I learned a lot from doing this though, and its easier than I thought, i.e. I think more games should at least make an effort to do this since passing the book around is always so fucking annoying and outside of the dice, the character sheet is the number one thing players are going to interact with throughout the course of play. I’ll probably do this for all of my games.

Here’s an example of the character sheet all done up, this time for a gunner named Abel