So, I got to run Heist for my friends over at Board With Life for their podcast, you can listen to the first part here, they go over character creation and start planning their heist, the titular Connecticut Job. Part 2 is where they start to get into the actual heist itself, part 3 is incoming.

The Connecticut Job is the first adventure I’ve written for Heist, and it’s meant to be a pretty broad introduction to the game. The setup is that Charles and Claire Willis, super-rich and powerful real-estate magnates, are having their 30th anniversary at their estate. Your contact has informed you that Claire will be wearing her priceless diamond necklace and also that Charles is supposed to have a lot of cash on hand for the event for unknown reasons. I try to keep my adventure write-ups for Heist down to two pages + maps, so I don’t have to do a lot of flipping around.

Above is a screenshot from what I print out before I run the session. Formatting it all nice is just a thing I like. But this helps me keep the big bullet points in place. How much money is available and what the big twists are.

I’ve started to find while running Heist that while PCs can make things go sideways all on their own, its important to have two or three unknowns that the players could easily miss if they’re not dutiful about their research or spend their prep-time unwisely. These are basically the moments in any heist flick where unbeknownst to the heroes, the people they’re trying to rip off are also embroiled in their own issues. In the case of the Connecticut Job the two big twists are:

These twists also means there’s an soft time-limit on the PCs’ actions. If they put the heist off a day or two, they’re likely to find the whole place looted already and Charles in tears having lost his wife, his money, his business, and his reputation all in one night (He is likely to hire the PCs to retrieve the goods Mrs. Willis has stolen from him for a cut of the return, or perhaps to steal from someone else in order to come up with the money he needs to pay Ada. There are options there). Additionally, if they get to the house early, all the jewels will be there, but the cash that Charles is bringing in to pay of Garza won’t have arrived yet. They need to do their research.1 The important NPCs in the Connecticut Job

I keep the stats of the NPCs on hand with one line about their plans or anything the PCs might need to know. Their Charm, Con, Lie, and Intimidate stats2 are there to show basically how tolerant they are to being affected by charm, cons, lies, and intimidation techniques. These are all pretty standard NPCs by the heist rules book. But NPC stats don’t really make interesting heist NPCs, their goals are more important usually.

I also keep a list of random encounters for the Heat checks PCs will have to make. I don’t stick strictly to this, this is if there’s no other idea that makes sense given the PCs immediate actions preceding the check. 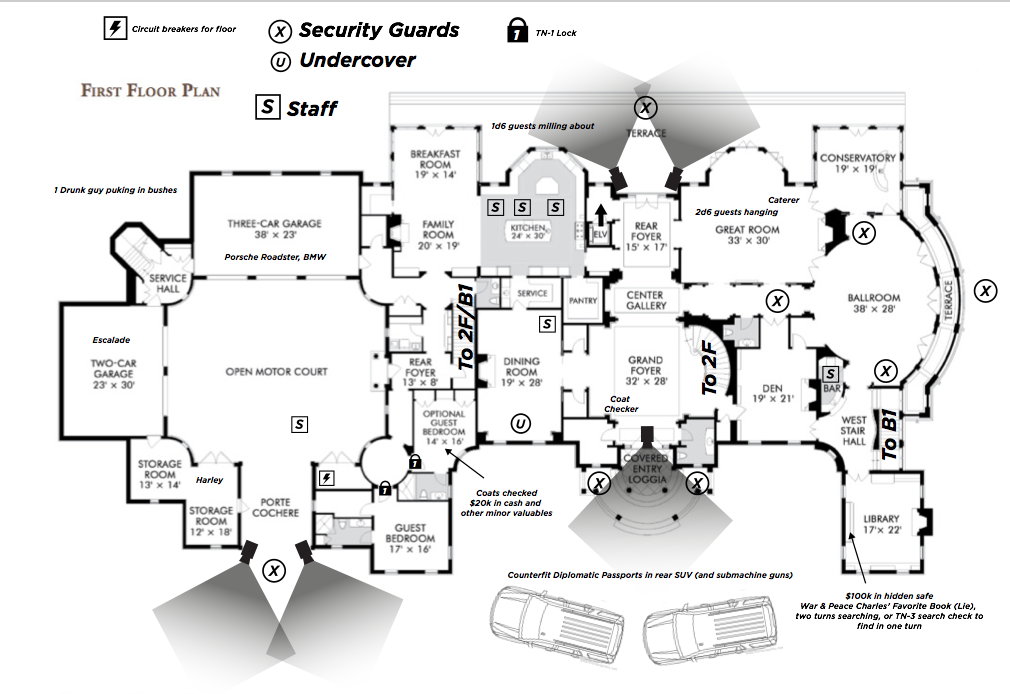 Map of the first floor of the Willis Estate

The last thing I do in prepping is go find the floorplans for a big house and then just write the key on the map, since this is quicker to use. Finding good floorplans for heist couldn’t be easier, since you can literally just google any type of building and search for the floorplans that look right to you. (Side note: You can download the full pdf of the floorplans I used here.)

The key should be pretty self explanatory, but the most important things I tend to note are cameras and their basic coverage, so I can tell if PCs would be in view of a camera or not. I mark where security is and then I note where treasure is and how difficult various locks are. Also, in heist type games its important to note where breaker-boxes are and how stringent you’re going to be about what they control (I generally just go one box per floor, that box can turn off the electricity for the entire floor). Additionally, if hacking is important, marking where computers are, and where access points may be is important too.

This is the second time I’ve run the Connecticut Job and I learned a lot from the first time. First, I setup a clear timeline - you have one week until the event in play. Two, I setup plans for if they struck before or after the party. In this game I had three PCs - Bludge, Heidi, and Topher - with a wide range of motivations and modus operandi. Board with Life is a comedy podcast, so Topher was kind of a jock idiot, Heidi was a retired HR lady with an obsession for bullfrog racing, and Bludge was non-violent (wanting revenge on the Willises for stealing his sisters property). So, not exactly the crew from The Town, but that’s great! Heist is flexible.

A big thing I learned in the prep phase is that not-everyone has consumed a massive amount of heist literature and has a proactive idea about how to case a job. I don’t think this is a bad thing, and there are a few ways to handle it depending on the kind of game you like to run:

Heist as a one-shot campaign

One of the reasons I think #3 works really well, is that I think Heist might operate best as a sort of one-shot campaign. Meaning you play a few nights in a row and then play some other game for a few months and then come back to Heist some time later. Because of the nature of how punishing heist can be, its common for PCs to die or go to jail or need to lay low for a long time. It’s also not that important to play the same characters session after session, so it’s great for groups that say don’t have a quorum for their regular D&D game and want to play something else for a night. Players who have played before can use their same characters, newbies can roll up new characters - it fits pretty well into how the heist genre works anyway. Basically, every time you play Heist, you’re playing a one-shot, with some of the same crew as last time and some new comers. Maybe one of your characters is sitting in the clink still, so you roll up a new one. I think for some diehards Heist can totally work as a sandbox campaign - but I think fitting it into the rotation of games you play might work even better.

I learned this because between Bludge the non-violent, Heidi the frog-racer, and Topher the burn-out, all three were playing sort of stoner-type thieves, which doesn’t lend itself well to high-stakes planning, recruiting, and casing. They were playing more like Tower Heist or Logan Lucky than Heat or Rififi. And that’s not a bad thing, that’s awesome. But it does mean you need to know your players and what kind of game they’re going to get into. If you’re playing with the Richard Stark fans and the hardcore Payday 2 crowd, I think it’s okay to say “Your contact told you there’s something going down at X location in X days, go nuts.” And let them do all the recon they want. And it’ll be fair later, when the job goes sideways to say “hey, you had six days to figure all this out, why didn’t you?” But if your group is more interested in getting into some kooky hijinx for the next few hours and have some laughs and steal some shit, it might just be better to say “Okay, your contact gave you the plans and told you all the problems…” and then let them sort of Rube Goldberg their way around it.

In our game: Heidi wanted to launch a frog-based distraction during the party, Topher wanted to order a bunch of pizzas, and Bludge wanted to sneak around and not hurt anyone. They did all of those things and it was awesome (feel free to listen)! But there was at least one point where Topher was like “We’re playing dumb criminals, shouldn’t we have just run up in here with a bunch of guns and taken what we wanted?” That was definitely an option that was on the table.

Ultimately, they found that Topher had a contact, a smoking buddy, that was on the catering crew (Tina). She’d get them in. They had the catering van tricked out with some smuggling compartments, as well as some false bottoms added to the food trays, so they could discretely hide stuff during the party. The procured an absurd amount of frogs. Bludge cased the joint and found all the major cameras and saw Josey and Mrs. Willis canoodling and making secret plans. Generally, the felt pretty ready for the event forward. They knew the location of the various safes and vaults, but not what kind of security they had on them, and they did not look at the guest list (and see that say an Ambassador and their security would be showing up). They felt reasonably prepared for the job ahead and we ended the first session there.

I’ll post up the conclusion when they post the third session and how well they faired during the job itself. They had a lot of fun, I had a lot of fun and I’m learning a lot about the specific kind of library content Heist needs. More and more I’m thinking, “rules light” games are nice - but only when there’s a pre-existing library of content to pull from. That’s why rule light D&D is a no duh - because there’s D&D content coming out of people’s asses non-stop. But in a heist game, the real work I need to do is researching security apparatuses, how they work, and how they’re defeated - for at least some verisimilitude in the game. Because, ultimately, Heist does have a pretty simple ruleset. But if a GM understands the rules and then goes “Okay, but like what kind of security would a rich guy have?” and I haven’t answered that question - then ultimately the game will have failed.