Last night I had my second playtest of Mothership, which is far too few for how long I’ve been working on it. This time I played with my regular D&D group, which consisted of:

They also had a contingent of NPCs: 5 Marines and a Co-pilot for Samuels, Freya.

They used the new character sheets which spell things out, so chargen took about 15 minutes overall. There are very few choices to make in Mothership chargen anyways (you pick a class and a loadout of equipment and that’s it - GMs1 can season to taste here). My least experienced player found the character sheet with all its arrows and numbering extremely helpful, so that’s a plus.

Their mission was to investigate why the mining colony on Banquo IV stopped responding to comms a few months back. They drop out of hyperspace and start to land on the planet, but take damage2 from unknown projectiles and make a hard landing on the surface. They landed close to the colony, but in retrospect I’d probably have them land randomly on the map or far enough away that they’d have to trek more to the base.

They landed on the landing site at Hex 52 but their jump drive was damaged, so while they could escape the planet, they couldn’t make it back home - they’d need to scavenger parts or be okay with jumping to a random location one jump away.

Samuels, the captain, goes out to inspect the damage to the Falstaff and finds this silver looking metal residue where the projectiles hit. He cuts off a sample with his hand welder and brings it inside3 the ship to their science lab for Edwards to look at. Under the microscope they see they’re in some sort of grey-goo situation, with the metal scraping actually being tiny self-replicating machines. They leave the ship and melt the metal that’s attached with a flame thrower, which sends off a piercing scream in their comms.

At this point they decide to split up, which I always love. Edwards the science Android has secret information that he’s supposed to rendezvous with an android on base named Stanislav who has data their employers find critical to the mission. I shared this with Edwards in private, which is my go to rule for all Androids and works surprisingly well. So far he has not decided to share this information with the rest of the crew. So Edwards takes a couple of marines and sets off towards Dig Site Delta 6. They’re Alpha Team. 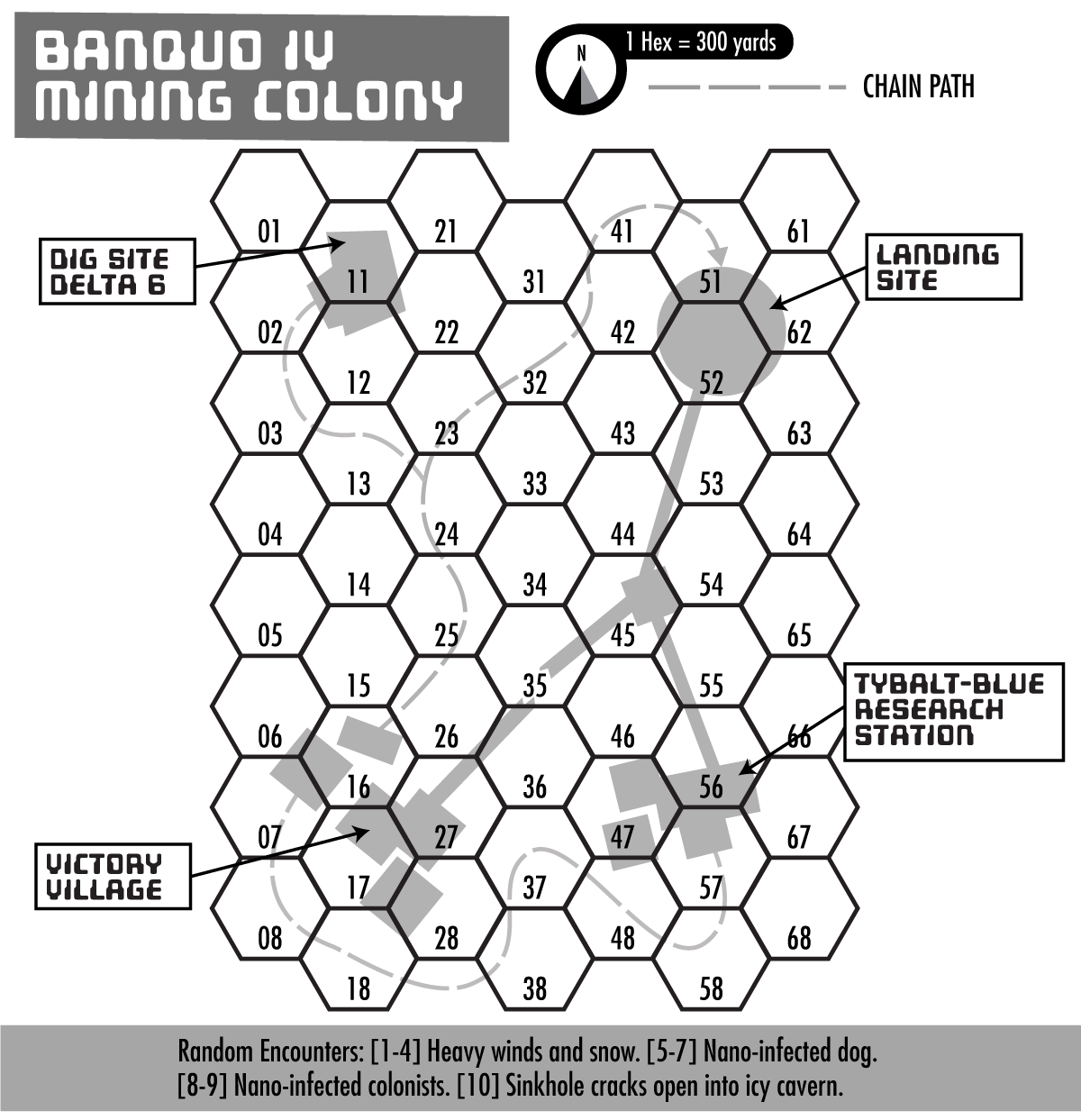 Hex Map of Banquo-IV I scavenged from an old adventure I was working on.

The surface of Banquo IV is a snowy-wasteland that’s barely terraformed and the mining colony pumps all this smog and ash into the air that it’s always snowing grey and black except for the giant smoldering orange glow coming from the dig site.

Bravo Team is Ramona and another couple of marines and decides to head towards Tybalt-Blue Research Station in search of parts to repair the ship. Charlie Team is Samuels, Dr. Goodhealth, Commander Louisa, the Lt., and Freya - they stay on board the ship. No one is in a particular hurry to see if there are any colonists alive, genre-savvy-ness makes them suspect this is in no way the case. Edwards wants to leave the nano-material on the ship to study further (Androids and Scientists get extra XP for studying alien shit on their ships), but Captain Samuels says take it off the ship or I’ll destroy it (Teamsters get extra XP for traveling to new planets). Edwards puts the material in a hazard bag and pockets it. Awesome.

There’s an airlock tunnel from the landing site to Tybalt Blue and Victory Village, but to travel along the paths in the snow is incredibly dangerous and there are just poles with chains threaded through them to hold on, which makes getting lost pretty easy. While holding on to the chains, Alpha Team runs into a fucked up dog creature who is clearly infected with some kind of technovirus. It attacks the team, overtaking the marines, but Edwards cooly strikes a flare and shoves it into the creature’s face, which sends it running off.

This was my first big piece of internal feedback. I’m greatly simplifying NPCs stats. Particularly for marines, which often accompany PCs and often die (see: Aliens). Like henchmen, they can become replacement PCs, but until then I don’t see the need to track them too terribly. This session I gave them a combat score, an armor save, a speed stat, and a psyche save, and instead of health gave them 1 hit for grunts and 2 hits for officers or heavies. I think I’m going to reduce it down to 1 stat for combat, armor, and speed, the same as I give monsters: Instinct. I may also roll all their combat together - I’m not sure yet. But I don’t want to bog down player actions with like six NPC marines taking super detailed combat actions.

Stress is another mechanic that came into play a lot this session - when PCs fail saves, like Psyche saves for fear, they often take a Stress point or two. Eventually, whenever something bad happens, they have to make a Panic Roll, if they roll under their stress, they Panic: meaning they roll on the Panic Table, and add their stress to the result.

To de-stress you can rest, have sex, drink, do drugs, go to therapy, go to a safe starport, that kind of thing. But the players latched onto this in a way that I didn’t think they would - Ramona after seeing something pretty terrible, told one of the Marines that she wanted to take him back to the ship and fuck him. Which is just perfect for this game, and will probably lead to other issues down the line (like aliens that sneak up on people having sex, etc.).

The marines are ordered to continue their search, so they enter Tybalt-Blue at Hex 56 and find it shut down - lights out. The mess hall is empty and left in a hurry. They find a barricaded hallway and water leaking out from the bathroom.

Meanwhile Charlie Team is scouring the ship’s hull for any trace of the grey goo and finding none coordinates between the other two teams via the comms. From the snowy-ash shamble two barely-organic humanoids covered in wires. When Dr. Goodhealth goes out to flame them, he can hear a bitcrushed whisper in his comms somehow broadcasting from the creatures, “Kill me.”

Alpha Team makes it to Dig Site Delta 7 at Hex 11 and finds the deep hole covered in more wires, and there’s a downed shuttle there as well that’s been dragged over to the mines. Surprisingly the autonomous mining machine that scour the plateau ahead of them are still working, and crawling across its surface like parasites over a dead god. Edwards and the marines head inside, down into the mines.

Back at Tybalt-Blue, Bravo team finds a corpse in the bathoom, a man infected with this nanovirus who has killed himself, his hand is now molded with the gun, and a small metal heart beats inside his open chest cavity. The corpse lurches forward when they get close enough to inspect it and the marines light it up. More psyche saves and stress all around.

We’re getting close to calling it for the night, but Ramona wants to check the last room at Tybalt-Blue, the barricaded one. The marines push past through boxes and barricades and find the empty comms room, untouched, with no one inside. Ramona looks over the logs and sees that attempts had been made by the colonists take make contact, to send out a distress signal, but they had all been blocked by some kind of interference. She puts on the headphones at the comms and makes contact with the Falstaff - the colony’s comms work. She can hear something dimly though in the speakers, and when she listens closely… she fails a body save and something slithers out from the headphones and down her ear canal. The marines have to double time her back to the ship. And that’s where we ended.

The players had a good time and they accomplished a lot in the three hours we played. The tough thing about designing a game like this is not only are you learning how to make the game, you have to learn how to run the game. So as a GM a few things I learned were:

Barely any combat this game - which I think is okay, my hope is that they build up enough stress that we get some Panic rolls during the climax next session. And I’ve got some ideas to prep with more density. I tend to get a light footprint on everything “Okay there’s a building here, and here,” and I’m decent at improvising and increasing the stakes. But I think what I could do is put more thought into “Okay what happens if they do nothing,” and “How does this situation deteriorate?”

The rules for Mothership stipulate that everyone is level 0 and everyone levels to level 1 after the first session (which was short and fun). With that in mind I’m wondering if I should’ve run this more as a funnel and definitely killed off a couple people just to show the team I might business. So that’s something I’ll work on